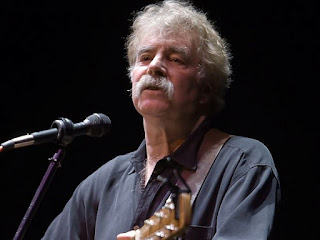 I'm a latecomer to Tom Rush's music. I have always been aware of his presence somewhere out there, but it wasn't until January 2005 when I first said "OK, the time has come for me to see what the fuss is all about". First, I got myself a ticket to see him at McCabe's, then I bought a CD titled "No Regrets - The Very Best of Tom Rush". Overall, his January 21, 2005 concert was good. Tom played solo. There were very few songs that I knew, but I liked most of his material. I liked his stories, too. I went home happy, but I distinctly remember thinking "OK, I saw him, it was good, but there's no need to catch him again". In retrospect, that was a terrible call.

Since that concert in 2005, Tom Rush's music has been slowly creeping into my brain, thanks to gorgeous songs such as "East Of Eden" and "River Song". By the time Tom took the stage last Friday at McCabe's, I could certainly call myself a fan in the know.

At seventy-two, Tom is still a powerful performer, both in a musical and physical sense. I caught the 8 PM show, with a late show scheduled for 10 PM. Yes, that's two shows back-to-back, yet Tom cut no corners and performed his entire first show without a pre-determined set list and without sitting down. Alternating original numbers with cover songs, and throwing in a healthy dose of humorous stories, Tom kept his audience captive for the entire duration of the show. His baritone voice was as expressive as ever, his bluesy guitar licks were top notch and everything he did just screamed credibility, as one would expect from one of the folk music's greats.

The songs I liked the best were Eliza Gilkyson's "Fall Into The Night", Bukka White's "Panama Limited" and Tom's own "Hot Tonight". The humorous songs ("The Fish Story Song", "Old Blevins" and "Let's Talk Dirty In Hawaiian") were great too. With so many highlights, it was only while driving home that I noticed the absence of "No Regrets" and "Urge For Going" from Tom's set.

Old friend and musical collaborator Trevor Veitch, an outstanding guitarist himself, joined Tom for the playing of three or four songs. They had fun together.

Tom Rush is one of the finest. If you like folk, blues or just good music, catch him when he comes to a venue near you. 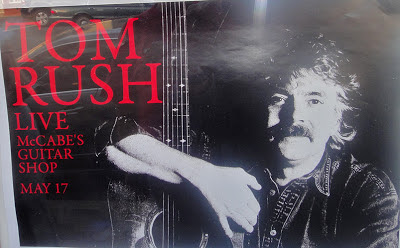