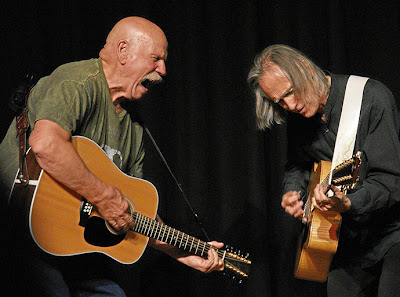 Typically, my response to nostalgia concert offerings involves a great deal of apprehension. Just like you, I have a soft spot for many musicians of the sixties, but do I really want to see them in action half a century after their heyday? Well, if they are as vibrant as Barry McGuire was Friday night at McCabe's, the answer must be a resounding yes.

Although I enjoyed Barry's concert very much, I will always remember the evening as a series of missed opportunities. It would have been out-of-this-world to have had P.F. Sloan walk in for the singing of "Eve Of Destruction" or John Sebastian engage in a duet with Barry on "Daydream". Well, neither of them showed up, nor anyone else, as a matter of fact. For almost two full hours, the stage belonged to Barry and John, who together delivered one classic gem after another, complete with stories about the musicians who wrote or sang those songs decades ago.


Barry is seventy-eight years old now, as in two years shy of his eightieth birthday - can you believe that? Almost eighty years old, and still on the road, still giving it all, still exuding immense joy while performing and still sounding pretty much like Barry McGuire.

Since 2007, I have caught Barry's "Trippin' The Sixties" act not fewer than five times, a clear sign that I'm a satisfied customer. The format of the show has remained intact, with occasional changes in content. Some songs get dropped, others get added. One of these new additions, "Dream A Little Dream Of Me", delivered by Barry almost like a whisper, was one of the highlights of the evening. Equally good was Barry and John's treatment of Tim Hardin's "If I Were A Carpenter".

After almost two hours of well-known classics, it felt great hearing the two songs chosen by Barry for his encore. What a surprise - who would have thought that Barry would sing a song written and recorded by Madonna?? But he did! His version of Madonna's "Frozen" sounded great and so did the tune that preceded it, "Somewhere Only We Know", from the repertoire of Keane, the British alternative rock band.

With his powerful guitar playing and good vocals, John York was once again an outstanding support musician, who got to show what he could do without ever trying to upstage the headliner. 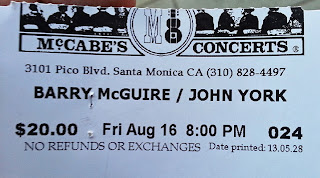