Here's a winning formula: bring together two outstanding singer-songwriters and present them to an educated audience in an intimate room on a Saturday night.

Last night's doubleheader at McCabe's kicked off with a one-hour-long set delivered by Ray Bonneville, a Canadian-born, US-based veteran singer-songwriter who had never performed in the Los Angeles area before. Armed with two electric guitars, a mouth harmonica and keeping the beat with his shoes gently stomping on his wooden footpads, Ray captured the audience from the very first song. If I was asked to described Ray's set in one word, I would say "consistency". Indeed, we heard nothing but good songs, no fillers at all, sung with the voice of an experienced storyteller. I liked Ray's idiosyncratic bass-heavy guitar playing - simple, not flashy, but quite effective.

I suppose Ray wrote all the songs he played, except of course for "I'm So Lonely I Could Cry", the old Hank Williams gem. "I'm The Big Easy" is the song that touched me the most.

After an intermission, it was Ernest Troost's turn to show what he could do, and show he did. The crowd's response went beyond polite applause - I heard folks around me whisper words like "sweet", "beautiful" and "wow" and I felt the same way. This was my third time to see Ernest in a live performance, I knew exactly what to expect, yet he still managed to thoroughly impress me with his stellar songwriting and outstanding finger-picking. Good songs came one after the other and once again the word "consistent" comes to mind, as in consistently top-notch. No doubt, Ernest is one of the very few singer-songwriters out there who can deliver full sets that don't include a single dud.

With fabulous songs such as "Resurrection Blues", "Oh Love", "The Last To Leave" and "Close", Ernest made me forget that "Travelin' Shoes", the song that initially made a fan out of me, wasn't even on the set list.

Unlike in January of this year, Ernest's show last night had no electric interludes. For most of the songs, he was accompanied by seasoned veteran Dave Stone on upright bass. For the singing of "Evangeline", his one-song encore, Ernest brought out Ray Bonneville, whose harmonica playing was a great addition to the song. 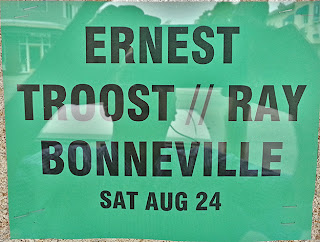