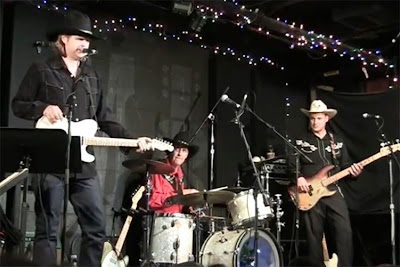 Friday night's Jackshit Christmas show at McCabe's was my 30th time to see the Boys from Cochtotan in action, an occasion that came with a few firsts.

The band has had sellouts in the past, but this time around all tickets were gone two full months in advance of the show, a testimony to Jackshit's ever-increasing popularity. For the first time ever, a 10:30 PM show was added and it did not take long for the late show to sell out as well. Also for the first time, ticket prices went up to $24.50, the result of an invisible-yet-powerful force called "supply and demand". Still, the increased price is more than reasonable, considering the massive amount of musical pleasure the ticket buyers received in return.

To a noticeable extent, the addition of the late show had an impact on the early one: clocking in at one hour and twenty-five minutes, the early show was a bit shorter than any of the previous Jackshit concerts and that meant fewer blistering guitar solos as well as fewer surprise guests. As far as the expectations of the fans are concerned, last year's Christmas show did set a very high standard both in terms of duration - over two hours of musical bliss - and the caliber of the guests. We all sort of knew that it would be very difficult to surpass last year's veritable smorgasbord of stellar guests, among them Grammy winners Jackson Browne, Lucinda Williams, Dave Alvin, Albert Lee and Grammy nominee Richard Thompson.

Last Friday, the band remained faithful to their long-standing tradition of not announcing the real names of their guests, and by doing so, they managed to stump the music fans present in the room with two acts that most spectators had no clue who they were. It took some extra effort after the show to figure out the identities of the guests and to my huge surprise, I discovered that once again we were privileged to watch the performance of an artist who has not only a Grammy, but also a Tony Award to his name.

Introduced as Brother John, a rather shy-looking singer took the stage and instantly grabbed everyone's attention with his outstanding voice and singing ability. Brother John, it turned out, was John Lloyd Young, the Tony-Award-winning singer who embodied Frankie Valli in "Jersey Boys", one of Broadway's most successful musicals in recent years.

John sang two songs, "Say No More" and "Can't Take My Eyes Off You". While no one had a problem placing the latter, it took quite a bit of research to discover that the former is a hard-to-find gem recorded by Roy Orbison in the late sixties. John's perfect delivery elicited an appreciative acknowledgment from Davey Faragher, who described John's performance as "classy shit".

Riding on the success of the musical, Rhino Entertainment released an album titled "Jersey Boys: Original Broadway Cast Recording", which in 2007 went on to win the Grammy Award for Best Musical Show Album. John Lloyd Young's voice is extensively featured on the album - his version of "Can't Take My Eyes Off You", Frankie Valli's well-known hit, is also included.


Introduced as three brothers and a sister who had just come out of a mine after having spent over three decades there, three unidentified male singers invaded the stage, teamed up with bassist Davey Faragher, and together, they brought great voices, good vocal harmonies and a touch of humor to the show. Alternating the lead vocal duties, they sang three songs: "Working In A Coalmine" (the Allen Toussaint-penned number made famous by Lee Dorsey), "Lookin' For A Love" (recorded by the Valentinos in the early sixties, with Bobby Womack on lead vocals) and "Mickey's Monkey", the often-heard hit song released by Smokey Robinson & the Miracles also in the early sixties. An equally unidentified lady singer joined the males during the singing of their second song.

The identity of these musicians was revealed to me after the show: they were none other than bassist Davey Faragher's siblings, who together with Davey, recorded a couple of albums in the seventies under the Faragher Brothers moniker. I don't know whether they still perform professionally, but one thing was very clear: they can sing. Sounding both soulful and funky, the delivery of their three songs can be described as flawless.

A few words about Jackshit, the band. They sounded great, as always. Val McCallum's best moments came during the playing of "Pretty Polly", an old favorite of mine. Pete Thomas' drumming was once again fabulous, especially during the final minutes of "I'm Coming Home", the old Johnny Horton tune.

As always, I brought along to McCabe's a few of my friends, most of them veteran Jackshit fans, but also a newcomer, Kevin, who happens to be the 111th person I have introduced to Jackshit's live shows. 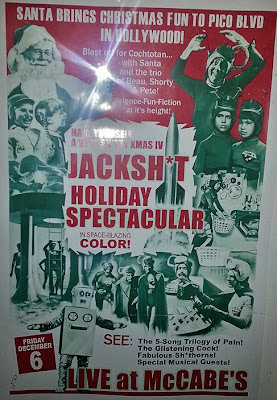