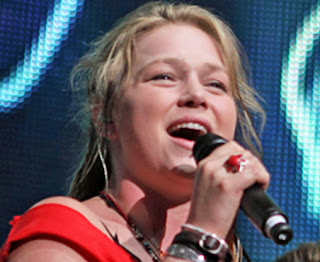 I do not follow TV talent shows, so for all I know, I may be the only music fan on Planet Earth who has never watched the American Idol, not even a single episode. Accordingly, my introduction to Crystal Bowersox came a few years late, when her name showed up on the list of upcoming McCabe's concerts. As always, I did my due diligence by going straight to YouTube and  the videos I watched there were convincing enough to make me buy my ticket, even though I can't call myself a follower of the contemporary country music scene.

Crystal's set consisted of mostly her own songs, some of them co-written with others. Her brief encore brought us the only cover song of the evening, Kris Kristofferson's "Me And Bobby McGee". While pretty much following Janis Joplin's epic vocal arrangement of the song, Crystal added her own touch to produce a version that was easily the highpoint of the evening.

It would have liked to hear a few more covers mixed in with Crystal's own songs - "Midnight Train To Georgia" would have been a great choice. Or a Patsy Cline number. Not that her own material was bad, but there were just too many songs I did not know. My fault, of course.

The songs that stood out for me were "Farmer's Daughter", "Someday", "Get Me Out" and "Amen For My Friends", all written or co-written by Crystal herself.

I was quite impressed with Crystal's voice, especially when her emotion and passion boiled over. Indeed, there was far more in her voice than just power and endurance.

Crystal's two-man band consisted of a lead guitarist who, strangely, goes by the name of Capital, and a keyboard player named Dan Reckard who can also play the sax. They also sang backup vocals.

Surprisingly, the sell-out crowd appeared to be a whole lot older than Crystal. About twice as old. I'm still wondering whether her appeal to an older crowd is a plus or a minus.

The evening kicked off with an outstanding set delivered by Seth Glier, a young singer-songwriter of considerable talent. Playing the piano and guitar with skill, Seth impressed me with his singing ability and well-crafted songs. The songs I liked the best were "The Next Right Thing" and "Man I Used To Be", both self-penned, I assume. The inclusion of "Wild Horses", the old Jagger-Richards tune, was a bit of a surprise. Sadly, Seth only played six songs, I would have loved to hear more. Throughout his set, he was accompanied by Joe Nerney, a blind musician who played the sax and sang backup vocals as well.