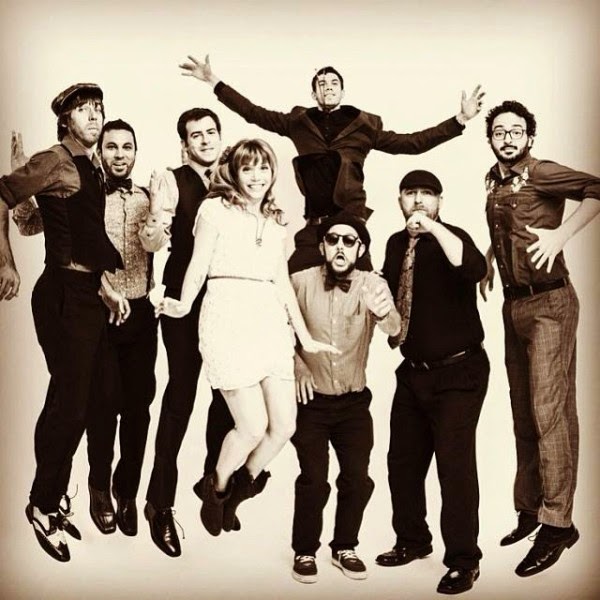 The Hollywood Bowl, the Greek Theater, and Garth & Trisha's backyard ... these are just some of the places where one can catch top-notch live music in the Los Angeles area. Yes, you heard it right, I did say backyard. The owners of the place, Garth and Trisha, are music fans who, once a month, open their doors and gates to let complete strangers in, with whom they have at least one thing in common: the love of music. Saturday afternoon they hosted the Dustbowl Revival, one of my favorite bands. I showed up with my Better Half, younger son and daughter-in-law. This was my seventh time to see the revivalists in the two years that have passed since my first encounter with the band.

The backyard's wooden deck turned out to be a perfectly viable stage that was more than adequate to accommodate the musicians. The audience was small, only about fifty folks, but that did not prevent the band from delivering an entertaining and generously-long concert. My initial doubts about the quality of the PA system were quickly put to rest, as the sound was exceptionally good from the get go.

The band came out as an octet that included Zach Lupetin (vocals, guitar), Kate Nicholsen (vocals, washboard), Daniel Mark (mandolin), Matt Rubin (trumpet), Ulf Bjorlin (trombone), Josiah Mory (upright bass), Josh Heffernan (drums) and Bob Hamilton (electric guitar, banjo). Introduced as a "guest", the latter impressed me very much with his skilful playing, but sadly, he did not return after the intermission. And speaking of the band's lineup: for the first time since I've been following the band, virtuoso violinist Connor Vance was not part of the action.

Picking a highlight is no simple task, as everything sounded great, from start to finish. I really enjoyed Kate's singing and, as always, I loved the outstanding work of the brass section, as well as Daniel's stellar playing of the mandolin. The multi-talented Zach Lupetin, the leader of the band, impressed me once again with his creativity, energy and song selection.

Overall, I had a heck of a good time and can't wait for my next encounter with the band. As far as Garth & Trisha's backyard is concerned, I will gladly go back for more.