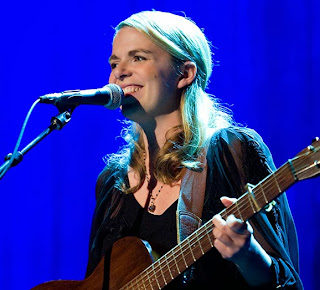 This was my fourth time to see Aoife O'Donovan in concert, a count that also includes her earlier appearances with Crooked Still and Ollabelle. So what made me want to see her again only six months after her last solo show at McCabe's? The answer is simple: her voice. And her smile.

Pronunciation guide: Aoife is an Irish name that sounds like EE-fa, with emphasis on the first syllable.

Aoife came out ten minutes after 8 PM and set the tone of the evening with "Donal Og", a slow Irish traditional tune. Although she did pick up the pace later in the show, most of her songs were mid-tempo, with only one or two faster numbers. This may sound like a complaint, but I have absolutely to gripe with her song selection, as such slower songs allow her voice and phrasing to shine the best.

The audience of about 120 people was treated to an eclectic set that included Irish and American traditional tunes, covers of songs from luminaries such as Tom Waits, Doc Watson, Duke Ellington and Bruce Springstee and, of course, her own original compositions. The ones I liked the best were Crooked Still's "The Lovesick Redstick Blues", Duke Ellington's "In A Sentimental Mood" and the self-penned "Oh Mama" and "Lay My Burden Down". For her one-song encore, she sang Tom Waits' "Fish And Bird".


In between the better-known numbers taken from "Fossils", her first solo album, Aoife threw in a few of her newer compositions that are yet to be recorded, such as "Porchlight", "Magpie", "Stanley Park" and "Hornets". The latter is a recent collaboration with her friend, Sarah Jarosz.

Just like six months ago, I found Aoife's solo act to be thoroughly enjoyable. Armed with only one acoustic guitar and performing without any support musicians, she can hold an audience captive like few others. I know I'll be back for more.