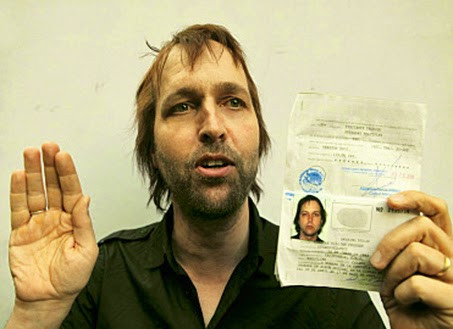 Concert announcements are seldom as explicit as the one for Chuck Prophet's appearance at McCabe's last weekend: Chuck Prophet plays his "Temple Beautiful" album, accompanied by a string quartet. In my case, this transparent approach paid dividends: without wasting any time, I got the album and a couple of listens later I knew that I had a hidden gem on my hands.

The show sold out three weeks in advance. As I walked in, I saw one of the busiest stage setups one could ever fit on the tiny stage of the venue. Chuck's microphone was at the center of the stage, the string quartet was to his left, with his four-piece band scattered around the stage wherever there was space. This left no room for conductor and arranger Brad Jones, who had to stand on an amplifier placed on the floor of the seating area, directly in front of the string quartet.

Everything about the show was great, with one exception: it ended too soon. Faithfully sticking to the song sequence of the studio recording, Chuck played all twelve songs from "Temple Beautiful", but that took less than an hour. Then he came back for a three-song encore that included two new self-penned songs, "Wish Me Luck" and "No Other Love", and a Flamin' Groovies cover, "Shake Some Action". The latter song, Chuck explained, is considered by many to be the "Mona Lisa of power-pop", a statement that produced laughter in the room.

Chuck's studio recordings are great, but Chuck live is even better. Appearing to be in his element up there on the stage and occasionally reminding me of Ray Davies, Chuck delivered one good song after another. The band kept up with him quite well and so did the string quartet. I liked his voice, I liked his guitar playing, but what impressed me the most was the quality of his music, essentially a melodic mix of mostly rock, with a touch of pop, country and folk thrown in for good measure.

When at McCabe's, I usually like to sit in the front, fully aware of the fact that the audio sweet spot is a few rows behind me - that's the theory, at least. But I've sat there enough times to know that when Wayne Griffith, Alan Kanter or Robin Danar handle the sound, I don't have to worry too much about my less-than-ideal position in the room. Case in point: Chuck Prophet and his eight support musicians, a gathering of multiple voices and instruments, both electric and acoustic. With Wayne at the soundboard, the audio mix was nothing short of exemplary, with every instrument coming across with clarity. The addition of the string quartet created a rich sound that I have not often heard at McCabe's, yet the overall feel of the music remained rock & roll, in spite of the presence of the strings.


The best songs of the evening were "Museum Of Broken Hearts", "Willie Is Up At Bat" and "White Night, Big City". I also liked "Little Girl, Little Boy", a song that featured the appealing voice of keyboardist Stephanie Finch, a recording artist herself. By the way, Stephanie and Chuck are married to each other.


I'm happy to say that my introduction to Chuck Prophet's music was more than auspicious and, needless to say, I look forward to Chuck's return to my favorite venue. 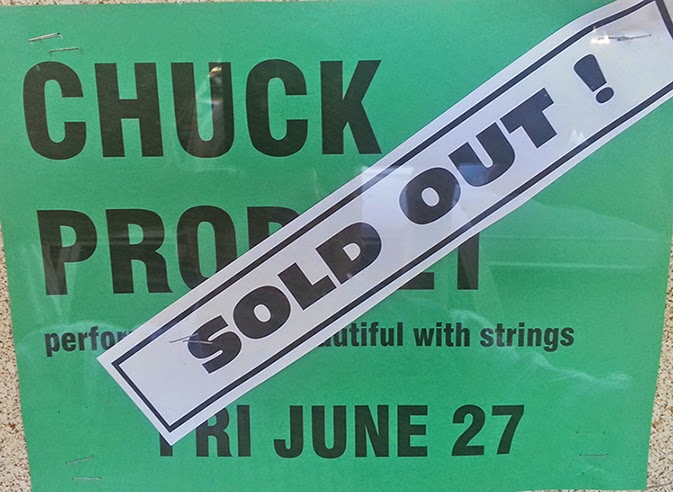