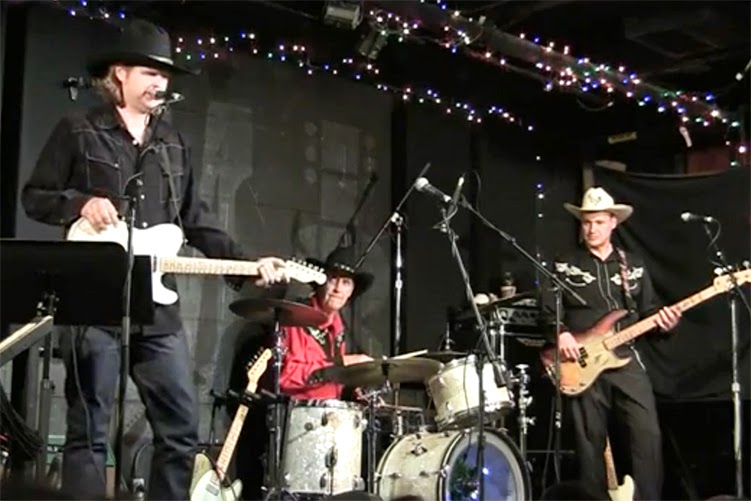 Announced as The Fifth Annual Have A Shitty Christmas Spectacular, these two shows did not need a lot of time to sell out - five hours after the announcement went out, all tickets for the Saturday show were gone and a few days later, the Friday show sold out as well.

This blog contains many other write-ups that focus on Jackshit, the band, so I won't repeat the real names of the band members, nor their assumed  monikers.

The band was in their usual great form, both in terms of music and humor, with Rock & Roll Hall-Of-Famer Pete Thomas being more talkative than ever before.

As a tribute to the recently passed-on Jack Bruce, Jackshit played a great version of "White Room", featuring Shorty's outstanding vocals. Beau stayed away from the guitar lines of Cream's original recorded and came up with his own tasty riffs.

As always, the band's Christmas shows generated a certain buzz, as we were all wondering who the surprise guests might be. This year we must declare ourselves happy with the crop of guests who popped in for a few songs each. Here are their names:

Let me first say that Jackson Browne can no longer be described as a "surprise"guest, as he comes out to play with the band more often than not. As always, Jackson delivered his songs in a low-profile kind of way that was well received by the crowd. After his Friday night's set of four-songs, he came out again for the encore to play "Take It Easy", which transitioned seamlessly into "Our Lady Of The Well". By the way, the song abbreviated as ROE on Friday night's set list is "Running On Empty", as you might have guessed.

Dave Alvin's appearance during the Saturday show was truly special. Adding outstanding storytelling and good humor to his stellar guitar playing and songwriting, Dave, a.k.a. No Shit, brought the house down like only he can. His musical chemistry with Val McCallum came in evidence as they were trading guitar licks while exchanging humorous looks. Watching the two feeding off of each other was definitely one of the highlights of the evening.

Youngsters Charlie Faragher (drums) and Nick Vuckovich (vocals), both members of a pre-teen band named Bang, joined Val McCallum and Davey Faragher to deliver "Nobody's Fault But Mine", from the repertoire of Led Zeppelin. In spite of their young age, Charlie and Nick did exceptionally well.

Introduced as Sassy Shit and Soul Shit, Davey Faragher's siblings Pammy and Jimmy took the stage to deliver two up-tempo classic soul numbers. I knew one of them - "Lovey Dovey", recorded by Otis Redding & Carla Thomas - but I had to look up the other one, a late sixties hidden gem titled "Soulshake", recorded among others by Delaney & Bonnie and Peggy Scott & JoJo Benson. I was very impressed with Pammy and Jimmy's vocal prowess and I know that I will remember Pammy's unconventional dance moves for a long, long time.
Saturday night was my first time ever to see Vonda Shepard in action. Looking and sounding great, Vonda delivered her own version of Willie Nelson's "Crazy". There were few parallel's between Vonda's rendition and the one performed the night before by Tammy Faye Starlite.


Here are the set lists of the two shows:

Overall, I enjoyed both shows very much, especially the second night, when we got to hear "Ugly And Slouchy", the band's "country-oldie-cum-rock & roll-medley" that, to these ears, was pure delight.