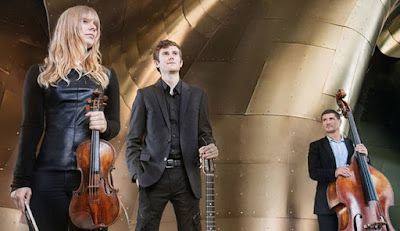 Only about forty folks were inspired enough to show up Tuesday night at the intimate Coffee Gallery Backstage in Altadena to see Trio Dinicu in action. While most people would legitimately ask "Trio Who??", I had no trouble placing the trio in Central/Eastern Europe, right where my own roots are. Pronounced Dee-NEE-Koo and named after Romanian composer and violin virtuoso Grigoras Dinicu, the band consists of three outstanding musicians hailing from three different countries, none of which are Romania:

Playing a mix of jazz, classical, folk and gypsy music, the trio put on a show that was nothing short of dazzling. Luanne is a formidable violin player who tackled with confidence musical pieces of high difficulty and I'd say she didn't hit a single bad note, no matter how fast she played. Her rendition of ethnic Hungarian, Romanian, Russian and Gypsy music sounded quite genuine to these ears. In spite of her unquestionable musical prowess, Luanne appeared to be exceedingly shy - she never addressed the crowd and did not mingle with the fans during intermission, nor after the show.

Guitarist Tommy Davy is a whole lot more than just a support musician. His guitar playing skills were impressive - he took the lead on a few songs and knocked our socks off with his incredibly intricate finger work - his rendition of "Tiger Rag" will be hard to forget. With Luanne limiting herself to just playing music, Tommy also assumed the role of band spokesman, as he introduced the members of the band and spoke briefly about each and every song they played.

Bassist, guitarist and vocalist Frank Anastasio was equally impressive. I loved watching his various styles of playing the double bass and enjoyed hearing him sing on "Two Guitars" and "Dobri Dien", which happened to be the only two songs of the evening that featured vocals.

Trio Dinicu deserves special kudos for having brought so many different musical genres under one roof, literally obliterating the boundaries that separate these otherwise distinct styles. I particularly enjoyed their medleys, although I'm yet to understand the presence of Soloviev-Sedoy's "Moscow Nights" right in the middle of the Schubert medley.

Given the consistently high level of the trio's performance, I find it difficult to pick highlights, but I will go ahead and mention Brahms' "Hungarian Dance No. 5", Monti's "Czardas", "Tiger Rag" and Dinicu's "Whistle Hora" as some of the evening's finest.

With Luanne Homzy being based in Los Angeles, I'm pretty sure that I will attend many more Trio Dinicu concerts. I can't wait. 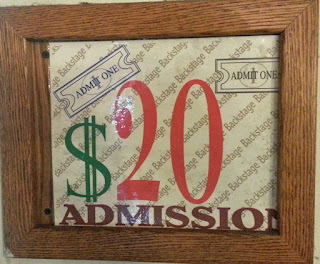