This year's Claremont Folk Festival took place on the hottest day of the month of May. With temperatures in the upper 80s and with barely any shade in the seating area, the artists scheduled to appear before 5 PM had to perform in front of mostly empty seats, which is a carbon copy of what happened last year at the 31st edition of the festival.

The honor of headlining the festival went to veteran musician David Grisman and his cohorts, collectively called the David Grisman Bluegrass Experience. In his seventy-first year of existence, David sounded good and so did his band, comprised of Keith Little (banjo), Chad Manning (fiddle), Jim Nunally (guitar) and Samson Grisman (upright bass). By the way, Samson is David's son.

To me, the festival's finest moments were delivered by Blind Boy Paxton, an artist I knew little about. Sporting a broad smile, a fine sense of humor and uncommon musical versatility, Jerron (his real name) was a revelation of massive proportions. I loved his singing, as well as the ease with which he played multiple instruments - one doesn't often see musicians who can deliver top-notch solos on banjo, guitar, fiddle, as well as harmonica. Jerron's repertoire of classic blues and all sorts of old-time ditties kept the audiences captive for the entire duration of his set and, after he played his last song, everyone - myself included - stood up and gave him a well-deserved standing ovation. The songs I liked the best were "Railroad Bill", "Mississippi Bottom ", " When An Ugly Woman Tells You No" and "Hesitation Blues".

Tom Freund and his band played a quality set that showcased his versatility as a singer, songwriter and instrumentalist, as he switched from guitar to mandolin to ukulele and finally to a large upright bass. The crowd got quite a bit louder when Tom introduced Grammy-winner Ben Harper, his long-time friend. Ben stayed on the stage for five songs, while keeping a relatively low profile. According to Ben's web site, the five songs were "Why Wyoming", "Angel Eyes", "Cakewalk Into Town", "Copper Moon" and "Collapsible Plans". Tom also sang "Ghost In This Town" and "Digs". Earlier in the set, Tom brought out Ellen Chase- Verdries (Ben's mother), for the singing of "Hickory Wind", a fine song from the repertoire of Gram Parsons.


Perla Batalla took the stage shortly after 3 PM, accompanied by her daughter Eva Batalla-Mann and a small band. As expected, her set included a few Leonard Cohen songs: "Sisters Of Mercy", "Bird On A Wire" and "Hallelujah". With her distinctive voice, she also sang Nat King Cole's "Nature Boy" and a Spanish language song called "La Llorona" (The Weeping Woman). I liked her set, but at one point I had to take a break from the blistering sun and took refuge in a shady area, away from the stage. I returned just in time to catch her set-closing rendition of "Hallelujah". Very nice.

The main reason I went to the festival was to once again see one of my all-time-favorite bands, the Dustbowl Revival. Their set kicked off shortly after 1:30 PM and went on for one hour. The band showed up as an octet, with the following lineup: Zach Lupetin (vocals, guitar), Liz Beebe (vocals, washboard), Daniel Mark (mandolin), Connor Vance (violin), Matt Rubin (trumpet), Ulf Bjorlin (trombone), James Klopfleisch (upright bass) and Josh Heffernan (drums). Their repertoire is an ever-evolving affair, which is both good and bad. The good: there's great new music every time I see them. The bad: they may never play their "classic" gems, such as "Dan's Jam" and "Western Passage". In spite of the heat, the band sounded fabulous. The songs I liked the best were "National Geographic", "Shine", the Band's "Up On Cripple Creek", the set-ending "Whiskey In The Well" and "Minor Swing", the old Django Reinhardt tune.

Frank Fairfield took the stage at 12:15 PM, accompanied by Tom Marion, an accomplished player of many different string instruments. The sun was hot and it was still early in the day, so only a small handful of people were in attendance. Their music can be described as "old-school folk music", the kind that sounds better in a smaller room.

Away from the Main Stage, the smaller but much shadier Oak Tree Stage hosted a few worthy acts, among which the Squeakin' Wheels sounded the best to these ears. I particularly liked Marguerite Millard's voice and singing style. Guest Ellen Chase-Verdries joined the band for the singing of three or four songs.

The festival featured a few other musical and non-musical events and activities, as shown in the following photographs:

As in previous years, the 32nd Claremont Folk Festival was organized by the Claremont Folk Music Center, a much-loved local store and museum of musical instruments, a relatively small operation that has limited resources. They deserve kudos for undertaking the running of this large-scale festival that attracts many hundreds of folks, year after year. While they do most things right, the organizers can do a whole lot better when it comes to the topic of VIP seating. With VIP tickets priced at $100, one would expect some law and order to be maintained in the area designated as VIP seating, but sadly, it was chaos and noise that prevailed over law and order. In the coming years, I will definitely think twice before shelling out the extra money. 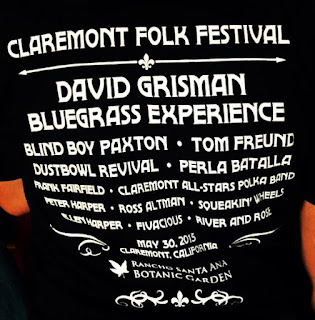