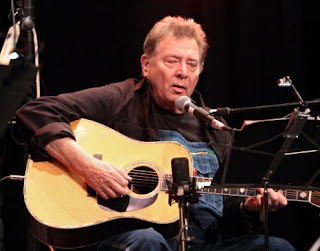 Dan Penn's first-ever appearance at McCabe's turned out to be exactly as I hoped it would be. With his singing and story-telling, Dan took us back to the sixties and seventies, to the time when he wrote or co-wrote most of his best-known songs and, needless to say, I cannot think of a better backdrop for such a special event than the concert room of my favorite venue, Santa Monica's McCabe's Guitar Shop.

About 125 fans showed up for the event. Seated at the center of the stage and playing his acoustic guitar with no one else in tow, Dan delivered his music and stories with humility and occasional humor. Intentionally or otherwise, he played most of his big hits before the intermission, yet paradoxically, I found the second half of the show, with its many lesser-known songs, to be at least as enjoyable as the first.

Dan kicked-off the proceedings with four heavy-hitters (see set list below), but then he strayed away a bit from his hand-written list. Later in the show, he even threw in a few "unlisted" songs, such as "Junkyard Junky" and "Way Back". Both sounded great. A third "unlisted" song, Percy Sledge's "It Tears Me Up", served as the evening's one-song encore.

To my ears, the best songs of the evening were "You Left The Water Running", "A Woman Left Lonely" and "Cry Like A Baby", three gorgeous songs I first heard decades ago with Otis Redding, Janis Joplin and the Box Tops, respectively.


At the respectable age of seventy-four, Dan no longer sounds like he did on his incredible Muscle Shoals recordings from the mid-sixties, but he still has plenty of soul in his voice and can still hold an audience captive with nothing more than his vocals and an acoustic guitar. His story-telling was top-notch - with unquestionable credibility, Dan spoke about his work with Aretha Franklin, Jerry Wexler, Tom Dowd, Otis Redding, Joe Simon and a few others. There were also frequent references to Spooner Oldham, his long-time songwriting partner.

At one point during the show, Dan acknowledge the presence in the room of a good friend, Mark James, the songwriter responsible for such mega-hits as "Suspicious Minds", "Always On My Mind" and "Hooked On A Feeling".

I went home totally happy, knowing that I had attended a truly special event. 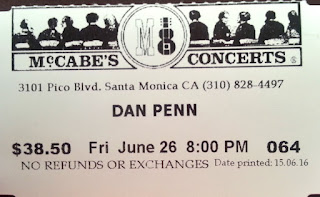