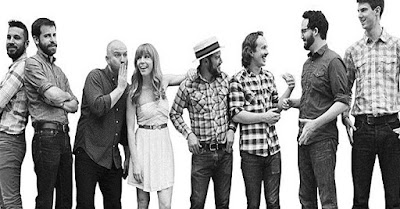 This was my tenth time to see the Dustbowl Revival in action, a number that adequately illustrates just how much I love the band and the music they make. I went to the show with my Better Half and two good friends, Joe and Deborah. The concert took place outdoors, at Pasadena's Levitt Pavilion, in front of a crowd that was at least one-thousand people strong.

Fueled by the size of the crowd and the festive occasion - it was the 4th of July - the band pulled all stops and delivered one of their best performances yet. Taking full advantage of the Levitt Pavilion's large stage, the band added mobility to their usual mix of great music and humor. The band's song selection was pure joy, as it brought back "Dan's Jam", "Orange Blossom Special" and "Western Passage", three gems that should never be left out from any of the band's concerts. I particularly enjoyed the extended intro to "Western Passage", which included Ulf's trombone ramblings, James' upright-bass rendition of "Amazing Grace" and Daniel's mandolin versions of "God Bless America" and "Hava Nagila", all very well received by the crowd.

Everything about the concert was great. Zach presided over the proceedings like he always does. Violinist Connor Vance was on fire, he went absolutely crazy on all of his solos. Ulf did his rarely-heard operatic vocal interlude, it was a blast. We all sang Happy Birthday to Josh, the band's drummer. Liz sounded and looked fabulous. Daniel and Connor became Siamese twins as they played each other's instruments. Matt delivered a few impressive trumpet solos. Dozens and dozens of folks got up and danced.

Overall, we all had a fabulous time. My friend Joe, who attended his first Dustbowl Revival concert ever, went home and without wasting a second, bought two of the last remaining tickets for the band's upcoming appearance at McCabe's, later this month.

Performing on a small side stage, Jenni Alpert (no relation to Herb) performed a decently good opening set. I liked her, and so did the crowd. 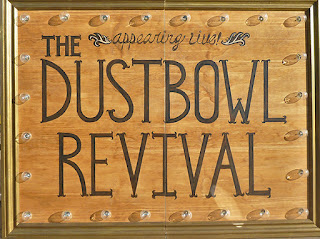