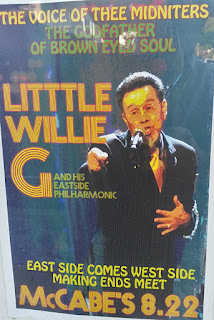 Take a look at the above concert poster and most likely you will notice that "Little" was spelled with three T's. No big deal, of course, just a small spelling error, but other than that, everything else about the concert turned out just fine. At the age of sixty-nine, Little Willie G. put on an outstanding show that brought to mind the equally great performances delivered by Garland Jeffreys, a senior citizen of rock & roll himself.

I can't call myself a connoisseur of the music of Thee Midniters, nor can I claim that I often listen to the music style that has brought them recognition, but listening to the very same music in a live setting is a different experience altogether. From the moment I walked into the concert room, I knew that I was in for something I had not witnessed before, certainly not at McCabe's. The venue's tiny stage had been built out to accommodate eight musicians and their gear, while five music stands belonging to Willie's brass section were placed on the floor, in the space usually taken by the first two rows of seats.

Without a doubt, Little Willie is one of the most soulful singers I have seen in recent years. I was very impressed by the quality of his voice, his passionate delivery as well as his expressive body language. Equally great was his band, but sadly, I can recall two names only: Jacob Garcia (Willie's son), who played the drums and sang backup and Larry Rendon, one of the original sax players of Thee Midniters.

Other than the show opener, Solomon Burke's "Everybody Needs Somebody To Love", I was totally unfamiliar with Willie's set list, yet I found most of his material quite accessible. The songs I liked the best were "Across The Bridge In East LA" and "I Found A Peanut".

As I write this post, one week after the show, the sounds of Little Willie's outstanding five-piece brass section still resonates in my brain. The contribution of these musicians cannot be overstated - with their two saxophones, two trumpets, a trombone and, occasionally, a flute and clarinet, they produced a sound I had never heard at McCabe's. Just as enjoyable were the three drummers and percussionists - yes, you read it right, Willie's band had not one, but three musicians in charge of providing the beat, which they did with power and precision. 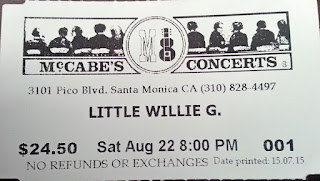