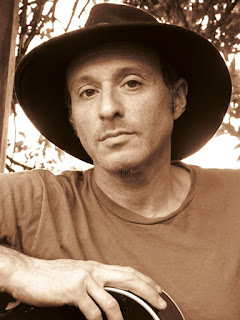 This was my first-ever live encounter with Dan Bern, a singer-songwriter I first heard of over twenty years ago and it's a mystery to me why it took me so long to finally give Dan's music a little bit more of my time. Last night's concert at McCabe's revealed to me a deserving musician who made me thoroughly regret my earlier indifference. About 120 folks came to see Dan's performance.

I showed up at McCabe's after having given "Hoody", Dan's excellent current album, two good listens and, to my pleasant surprise, Dan played the album in its entirety. While the album is remarkably consistent, a few songs still managed to stand out: Johnny Cash's "One Piece At A Time", which Dan made into a tongue-twisting sing-along, and the self-penned "Sky", "Late Show" and "Welcome". I liked Dan's singing style as well as his sense of humor.

After performing ten of Hoody's eleven songs, Dan took a short break, then came back with a few more numbers: "Black Tornado", "The Golden Voice Of Vin Scully", the hilarious "Talkin' Canadian Blues", "Jerusalem" and "Late Show", the eleventh song from "Hoody".

Throughout the show, Dan was accompanied on drums by Adam Busch, who also provided a few brief vocal interludes.

The evening was kicked-off by Alex Minoff, an employee of McCabe's. His five-song set was quite listenable. I particularly liked the lower half of his vocal range. 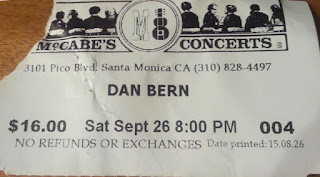