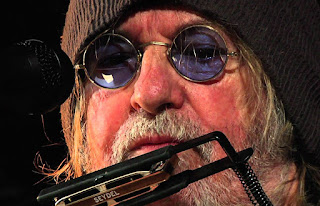 Last night, it took me eighty minutes of driving to reach McCabe's. This gave me plenty of time to question my sanity, with thoughts such as "why in the world do you need to see someone for the fourth time, especially since you don't often listen to his music". It's true - while I hold Ray Wylie Hubbard in high respect - I don't find his recorded music compelling enough to make we want to hear it time and time again. Somewhat surprisingly, though, ten minutes into the show, I was congratulating myself for having decided to be there.

Unlike in his previous appearances at McCabe's, Ray performed his entire show without sitting down.  Now that's a minor detail that has little to do with his music, one might say, but to me, this made a universe of difference. Indeed, I had never seen him as youthful and as energetic as he appeared to be last night. Ray's voice was strong and expressive, while his guitar playing made much more of an impact on me than anytime before. I also loved his sense of humor - I found myself laughing out loud multiple times during the concert. Ray knows he's special and maybe that is why he described himself as an "acquired taste that's not for everyone".

Accompanied by drummer Kyle Schneider, Ray played for us self-penned songs culled from various stages of his career, including his current album, "The Ruffian's Misfortune", plus a couple of covers.


Ray's show had many highlights, among them "Mother Blues" and the rousing extended medley that consisted of "Wanna Rock & Roll", "John The Revelator" and "Barefoot In Heaven". The sell-out crowd responded with a well-deserved standing ovation. For his one-song encore, Ray brought out an unidentified singer with whom he delivered Mississippi Fred McDowell's "You Gotta Move", which, not unexpectedly, got the crowd standing up yet again.

Special kudos go to Kyle Schneider, whose tasteful drum-playing contributed a lot to the success of the evening.

In summary, I had a fabulous time last night at McCabe's and I'm pretty sure that Ray's path and mine will intersect again sometime in the future. 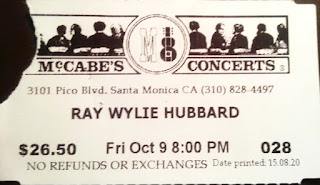