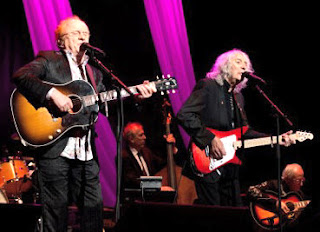 Last night I caught not one, but two legendary musicians, Peter Asher and Albert Lee, performing together as a duo in the intimate backroom of my favorite venue. The evening turned out to be pretty much as I expected. On the musical front, we heard a few landmark songs from the 50s and 60s, a handful of Peter & Gordon hits, plus a few unexpected numbers, such as Cliff Richard's "With A Girl Like You", Glen Campbell's recent "Better Place" and Green Day's "Good Riddance". The music was fine, but to me, the evening was carried by the many captivating and often humorous stories shared by Peter and Albert, two artists whose undisputed credibility gives them the license to drop as many names as they want, without sounding pretentious at all. Lots of names were mentioned, some in passing, others in more detail - Linda Ronstadt, Carole King, Del Shannon, Buddy Holly, Emmylou Harris, James Taylor, the Everly Brothers, Brian Epstein, Paul McCartney, Jimmy Webb, Elvis Presley, Glen Campbell, the Crickets, Cliff Richard, Frank Sinatra, Dave Edmunds, James Burton, Hank B. Marvin, Nelson Riddle, Natalie Merchant, the Searchers ... the list goes on and on.

Peter named Linda Ronstadt as his all-time favorite female singer. Also spoke with admiration about Carole King's talents as a songwriter, singer and piano player. Albert talked about the fortunate circumstances that made him a long-time associate of Emmylou Harris and the Everly Brothers. Also spoke about one of his earlier bands, Heads Hands And Feet.

When it came to singing, Peter and Albert both had their solo moments, but most of the time they performed as a duo. There were no other musicians on the stage, as Peter played his acoustic guitar, bass guitar and the banjolele, which, you guessed it just right, is a cross between a banjo and a ukulele. Albert played the keyboards and acoustic guitar. None of their vocals were thunderous, and they did not have to be.

Overall, the show was heartwarming, thoroughly enjoyable and most certainly unforgettable. With a combined age of 142 years, Peter and Albert still have what it takes to entertain. 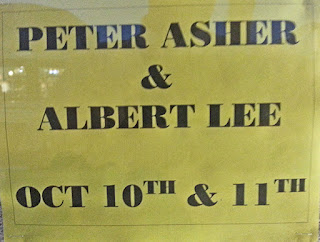 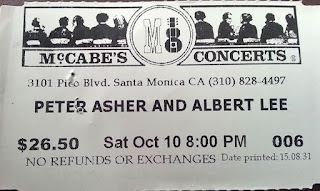