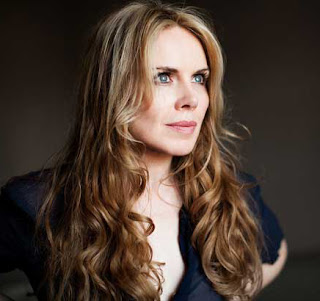 I first saw Mary Fahl's name in print a couple of months ago, when her concert was added to the calendar of my favorite venue. My instant reaction was Mary Who?, and I probably wasn't the only one to say that. Still, I bought my tickets almost immediately, after watching no more than one or two persuasive YouTube videos.

Friday night I witnessed one the finest shows one could ever catch at McCabe's: Mary's performance left me mesmerized and in awe of an artists who supplements her incredible vocal prowess with a pleasant personality, humility, good looks and a sense of humor. The timbre of Mary's voice is something to behold and I do disagree with author Ann Rice, one of Mary's best fans, who feels that  Mary's voice has an androgynous quality to it - to these ears, Mary's vocals are decidedly female, but of a unique nature.

A self-proclaimed "unabashed francophile", Mary Fahl opened her show with a few words about the day's tragic events in Paris, followed by a heartwrenching rendition of "La Vie En Rose", the world-famous French song first recorded by Edith Piaf in the 1940s. The show continued with a mix of numbers culled from Mary's solo repertoire, her days as the front-woman of the October Project and a handful of outstanding covers. I loved everything I heard, so I won't even try to single out any highlights.

The hand-written set list does not show Nina Simone's "Wild Is The Wind", Mary's own "Like Johnny Loved June" and "Exiles (The Wolves of Midwinter)" and Joni Mitchell's "Both Sides Now", which were performed by Mary at various points during the show.  We also heard a short snippet from Blind Willie Johnson's "The Soul Of A Man".

The show ended with Mary summarizing her own appearance at McCabe's as "pure delight", which happen to be precisely the words I would use to describe the time I had watching Mary Fahl perform. 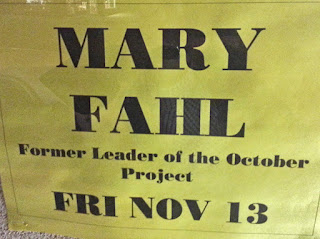