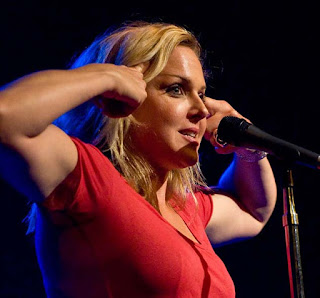 Movies have ratings, HBO programs start with content warnings, CDs have parental advisories, but - much to the chagrin of those who walked out of Storm Large's show last night - concerts do not come with any such early warnings. The event's mailer talked about Cole Porter, Kurt Weill, Carnegie Hall, symphony orchestras, Broadway, the American songbook and the like. What we actually got was, granted, great music, but also a tremendous amount of profanity-laced language. I counted four couples who stood up and walked out during the first fifteen minutes of the show, and I could only see the first four rows ahead of me. Many others left during the intermissions, but not everyone felt that way - throughout the show, most of the attendees responded with frequent laughter and applause, then gave her an enthusiastic standing ovation at the end of the evening.

I'm not prudish at all, but even I wasn't prepared for this veritable onslaught of profanities that just went on and on. No bodily function was left out and a lot of attention was given to both male and female genitalia during Storm's extended ramblings that I found neither witty, nor humorous. Such a performance may be described by some as edgy or liberating, but to me it was just time that could have been better used with more music and less vulgar language. Paradoxically, this came from an artist who can certainly keep an audience captive with nothing more than her musical skills.

The concert started prompt at 8 PM with two Cole Porter classics, "I've Got You Under My Skin" and "It's Alright With Me", both delivered with intensity and passion. What followed was a mix of covers and original songs, all showcasing Storm's outstanding vocal range and voice control. Quite understandably, I enjoyed the covers more than the originals. I liked her heartfelt interpretation of Jacques Brel's "If You Go Away", sung in both English and French, but I was less taken by her overly theatrical re-working of "Hopelessly Devoted To You".

After a short intermission, Storm came out wearing a different dress, but that was the only thing that changed - we heard more covers, more originals and more "salty language", as she put it. Her renditions of Elton John's "Goodbye Yellow Brick Road" and the Queen's "Somebody To Love" did not stray too far from the well-known originals and they both sounded great.

Throughout the show, Storm Large was accompanied by a competent band that calls itself Le Bonheur, which is French for happiness. Lead by piano player James Beaton, the band also featured guitarist Scott Weddle, bassist Matt Brown and drummer Greg Eklund.

By the way, this was my second time to see Storm Large performing on stage. In 2010, at the Mark Taper Forum, she thoroughly impressed me with her outstanding interpretation of a few Randy Newman songs (see Concert #580 elsewhere in this blog).