Donald Trump would have been right, had he described this show as "low energy", but low energy is precisely what I needed on that late Sunday evening, at the end of a long week. Gentle songs came one after another, many lullabies among them, but instead of putting me to sleep, these young ladies grabbed me solid with their melodic tunes and gorgeous vocal harmonies.


Wearing identical dresses, Martha and Lucy conversed with each other, shared stories with the crowd, sang most of the time as a duo, but they also had their own solo mini-sets. Everything they did was low-key, but they still managed to be engaging and most definitely entertaining. Their combined voices sounded great even though their singing styles are a bit different, with Lucy's more traditional sound being well complemented by Martha's edgier approach to singing.

Most songs we heard came from "Songs In The Dark", their joint recent album - come to think of it, they played practically the entire album. I recognized a few songs, such as "Hobo's Lullaby", Richard Thompson's "End Of The Rainbow', the well-known "El Condor Pasa" and "My Mother The Mountain" from the repertoire of Townes Van Zandt. Some post-concert research revealed that, not unsurprisingly, family members Loudon Wainwright, Terre Roche and Kate McGarrigle also contributed songs to this unique album.
Overall, I had a good time listening to Martha and Lucy and I look forward to seeing them again. 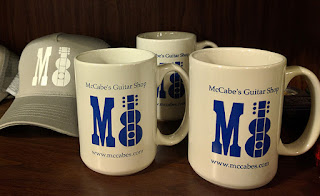