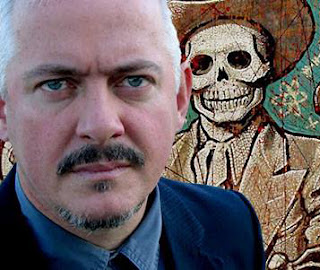 This was my first-ever encounter with Jon Langford, the supremely talented Brit who first impressed me in the mid-eighties, when he was with the Mekons. I went to the show with my friends Michael and Nicole.

To our surprise, Jon came out with a band that included not one, but two alumni of his former band: Sally Timms, the outstanding female voice of the Mekons and Rico Bell, an accomplished singer and multi-instrumentalist in his own right.

SETLIST
Anything Can Happen
Tom Jones Levitation
I Picked Up The Pieces
Hell's Roof
Buy It Now
Broken Bottle
Gold Brick
All Roads Lead Back To Me
Drunk By Noon & Dreams Of Leaving
The Rose From Your Garden
Pill Sailor
It's Not Enough
Mersey Song
Nashville Radio
Sentimental Marching Song
Homburg
Wild And Blue
Memphis, Egypt