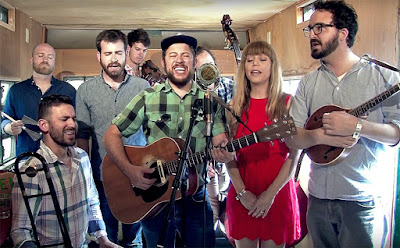 This was my eleventh time to see the revivalists in concert, yet this seemingly excessive exposure to their live appearances has not dampened my enthusiasm for what they do and even though I know precisely what to expect from the band, I still end up shaking my head in disbelief - it's hard to believe, but these guys, as good as they are, keep getting better every time I see them.


Every time I catch a Dustbowl Revival show, I try to bring someone new along. This time it was Bill & Sue's turn to be introduced to the music of this wonderful ensemble and they both had a blast.

*** The band's repertoire is an ever-evolving affair, with new material frequently finding its way into their set list *** Trombonist Ulf Bjorlin seems to have become the band's Comedian-In-Chief, a job he is definitely good at *** Drummer Josh Heffernan, who typically keeps a relatively low profile, delivered a rousing drum solo of the highest quality *** Showcasing the individual skills of all players, the protracted intro to "Western Passage" was one of the evening's most enjoyable parts, as it brought together Ennio Morricone, Hava Nagila and countless other sounds *** The band must be commended for having played two generous sets that clocked in at over sixty minutes each. 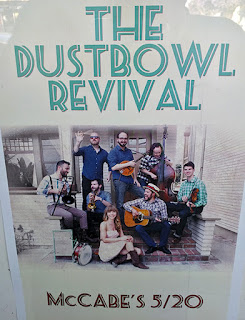