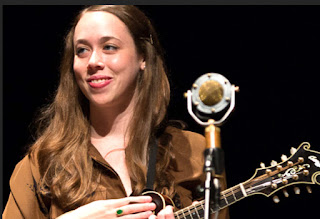 Friday night at McCabe's, Sarah Jarosz put on a show that ranks right up there with the finest I've ever seen at McCabe's, or anywhere else, for that matter. My concert-buddy Steve cringes whenever I throw in one superlative too many, but how can one describe Sarah Jarosz without a massive helping of superlatives?

Accompanied by two great players - Jedd Hughes on acoustic and electric guitar and Jeff Picker on upright bass - Sarah delivered a set that borrowed heavily from "Undercurrent", her just-released new album that she either wrote or co-wrote in its entirety. Her focus was firmly on music, not chatter, and that allowed her to play seventeen or eighteen songs during her blissful ninety-minute set. Kicking off her show with two of her "oldies" - "Annabelle Lee" and "Build Me Up From Bones" - Sarah treated us to her own compositions, plus a few outstanding covers, such as Tom Waits' "Come On Up To The House" and Bob Dylan's "Ring Them Bells".

Accompanists Jedd and Jeff deserve extra praise for their outstanding musicianship and the way they supported Sarah - there was plenty of eye contact between the three, with Sarah sending out frequent smiles of approval to her musical cohorts.

The star of the show was Sarah's golden voice, but I was equally impressed with her skills as an instrumentalist, as she alternated between acoustic guitar, banjo, mandolin and even electric guitar - her masterful rendition of Tim O'Brien's two-song instrumental medley, "Land's End" and "Chasin' Talon", was one of the highlights of an evening that did not suffer from a lack of highlights. And speaking of highlights: I enjoyed very much the self-penned "Early Morning Light" and also "Comin' Undone", a song Sarah co-wrote with the young and talented Parker Millsap. And one more thing: not too many artists have Sarah's disarming smile and humble-yet-confident stage presence.

Overall, I had a thoroughly enjoyable time at McCabe's. Experiencing Sarah's music in a live setting is something I definitely want repeated.
Curtis McMurtry opened the show with a thirty-minute set that, at first blush, sounded a bit uneven, yet it still managed to impress me with two outstanding songs, "Sparks In The Wind" and especially the haunting "Foxhole". By the way, Curtis is James McMurtry's son. 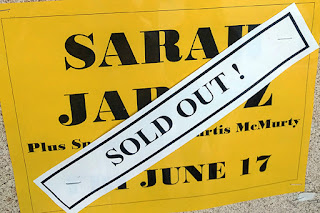