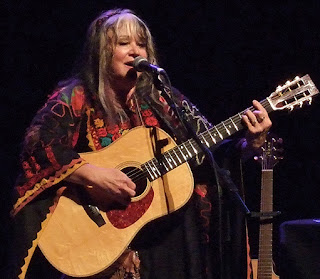 I went to the show knowing full well that "Melanie 2016" does not sound, nor look like the Melanie of the seventies, but that wasn't going to stop me from being there - I just had to be in the same room with the artist who, over the decades, has given me so many pleasurable moments. Yes, I'm a life-long fan, but I know that not everyone is - some of musical friends have never embraced her quirky singing style.

Moving with a certain degree of difficulty, Melanie took the stage with her son Beau Jarred, who, throughout the evening, played a variety of string instruments and sang backup vocals. She opened her set with the well-known "Beautiful People", but what followed was not an evening of greatest hits, even though we did get to hear "Brand New Key" and "Look What They've Done To My Song, Ma". I was unfamiliar with many of the songs she sang for us, but I must admit that, as far as my knowledge of Melanie's discography is concerned, I am pretty much stuck in the seventies. To these ears, some of those newer songs sounded better than others, and at times, the timbre of her voice, as well as her phrasing, sounded fairly close to her classic recordings.

There was a large-print set list on the stage, but Melanie was not in the mood to follow it. She asked for requests, and the requests came pouring in - that's how we got to hear the delightful "I Don't Eat Animals", one of the evening's highlights, and "I Tried To Die Young". I also liked "Smile" and "Angel Watching Over You", neither of which appear on the set list. Regrettably, she did not sing "The Nickel Song", nor "Ruby Tuesday", two of my all-time favorite Melanie gems. She was in a talkative mood and I found her stories engaging, albeit a tad too long.


Melanie's daughter, the very confident Jeordie Schekeryk, made an unannounced appearance that was surprisingly good. The three songs she sang - "Bomb", "Ego" and especially "Ain't No One Gonna Love You Like Me" - were highly listenable. Her brother Beau Jarred impressed me with his guitar-playing skills and great personality, too. His rendition of "Malaguena" featured two very distinct styles of playing, one traditional, the other I could probably call alternative.

Overall, I had a good time at McCabe's and it felt great giving Melanie an extended standing ovation at the end of the show. Yes, she did not look nor sound quite like in the seventies, but I still enjoyed the evening, very much. 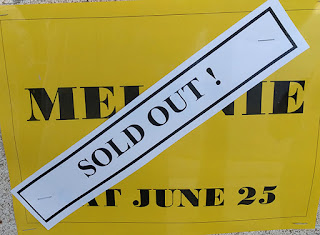