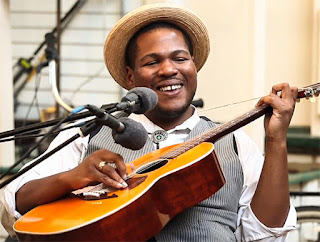 Jerron "Blind Boy" Paxton ... what a talent! It's hard to believe, but this musician is only twenty-eight years old, yet he can mesmerize a crowd with songs few folks have ever heard and may never hear again. What's his secret, one might ask? Well, he is a good singer and a top-notch multi-instrumentalist who also happens to be funny, warm and friendly. Being the embodiment of likeability will certainly help any musician, but ultimately it's the music that carries the day and that's where Jerron excels. I have seen many other multi-instrumentalists in action, but few have impressed me as much as Jerron did. It's not only that he switches from one instrument to another with the greatest of ease - this guy can make each of those instruments sound like they come from an era that predates his existence by many decades. Indeed, throughout his performance last weekend at McCabe's, Jerron exuded a sense of genuineness that one would not expect from someone of his age.

Kicking off the evening with "Michigan Water Blues", Jerron delivered a generous set that clocked in at exactly two hours. There was no predetermined set list, but he knew exactly when to switch, back and forth, between his guitar, banjo, harmonica, fiddle and piano. I can't name too many of the songs he played, as they were mostly obscure blues and ragtime songs from, I suppose, the pre-World War II era. "The Very Thought Of You" and "Alabama Bound" were among the handful of numbers that I did recognize and they all sounded great.

Jerron is not endowed with a huge thunderous voice, but he can certainly add a lot of nuance to everything he sings, with the end result sounding truly genuine to these ears. Then there was the humor ... it was absolutely amazing to see how much laughter this young musician was able to generate from the very moment he took the stage. And he saved his best for last, the hilarious set-ending medley consisting of "When An Ugly Woman Tells You No" and "I Ain't Got Nobody", and old song I first heard with Louis Prima. Needless to say, Jerron received a warm and well-deserved standing ovation. I went home extremely happy and I know that I'll be back for more. 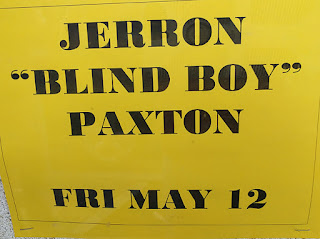