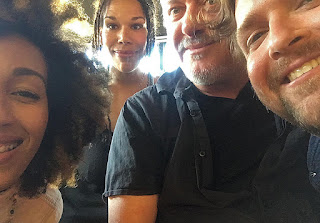 I first got acquainted with Jon Langford and his then-band, the Mekons, in 1989. Since then, I have been passionately following not only his solo career, but also his various side-projects, such as The Waco Brothers and Pine Valley Cosmonauts. His current ensemble, curiously named Jon Langford's Four Lost Souls, came to my favorite venue two weeks ago and based on their performance there, I'm happy to say that, even though Jon has just turned sixty, little has changed - his music is as listenable and captivatingly quirky today as it was twenty-five years ago. His idiosyncratic melodic sense is still there and his songs, with their mix of country, folk, rock and punk, are still difficult to categorize.

Jon came out a few minutes after 8 PM with the other three Lost Souls, namely guitarist John Szymanski and singers Bethany Thomas and Tawny Newsome, and together they put on a thoroughly enjoyable show that had a relaxed feel to it, with lots of humor, laughter and most of all, great music. Their set included most songs from their latest album, unsurprisingly titled "Four Lost Souls" - I liked all songs, but "Snake Behind Glass", "Half Way Home" and "Poor Valley Radio" managed to stand out. John turned out to be a devilishly good guitar player, while Bethany and Tawny sang lead and backup vocals with confidence and competence.

Jon's set ended with two of his older songs, "Drone Operator" and "Pill Sailor", and also a surprising cover, Danny O'Keefe's "Good Time Charlie's Got The Blues". Overall, I had a heck of a good time at McCabe's watching this truly unique artist. 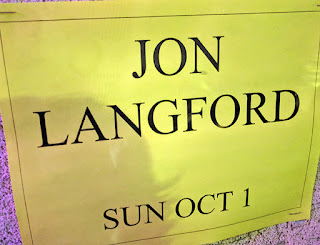