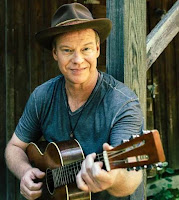 In 2013, when I first saw Shawn Mullins in concert, he surprised me with a show that had it all - intensity, good songs, strong vocals and great guitar playing - and since then I had been wanting to simply relive that experience. Well, it took a few years, but last Sunday I finally had my second encounter with Shawn and let me tell you from the get-go, he did not disappoint.

The evening started without an official introduction: with the lights still on, Shawn took the stage to announce an opening set by his musical cohort, Radoslav Lorkovic. Originally from Croatia, Radoslav is a high-caliber piano player who can also sing and play the accordion. I had seen him before - in 2008, he accompanied the great Odetta, also at McCabe's - and I distinctly remember Odetta taking pride in pronouncing his name without having to read it from a hand-written note.
Radoslav's opening set put on display his versatile piano playing skills, but was maybe one song too long.

Shawn took the stage just before 9 PM, which is a bit late for a Sunday show. With his unmistakable voice and intense delivery, he sang mostly his own songs, but threw in two covers as well: "The House Of The Rising Song" and "The L&N Don't Stop Here Anymore", a song I first heard with Michelle Shocked, then later with Johnny Cash. Shawn's self-penned songs were very good, some had good hooks, but none quite as catchy as the refrain of "Lullaby", his major hit from years ago. The songs I liked the most were "California", "Beautiful Wreck" and "Shimmer".

Throughout the concert, Shawn was accompanied by Radoslav - or Rad, as Shawn called him - and a bassist whose name I sadly did not catch. Rad played the piano, accordion and keyboards. Overall, it was a good show. 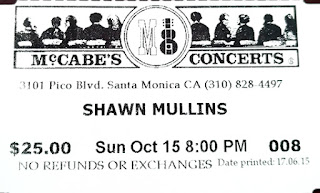