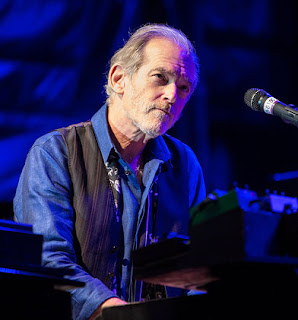 This was my second time to see Benmont Tench in a headlining role. Announced as "Benmont Tench and (hopefully!) Friends", the show did not disappoint, not in terms of Benmont's own performance, nor the number and caliber of the "friends" who supported him last night at the Largo.

Benmont, the solo musician, has little to do with Benmont the Heartbreaker, and that is not necessarily a bad thing. That just shows the wide range of his musicianship, and while I count myself as a fan of Tom Petty's work, I can also fully appreciate Benmont's alter ego, the sensitive and occasionally sentimental balladeer that he undoubtedly is.

As expected, Benmont played quite a few songs from "You Should Be So Lucky", his first and, until now, his only solo album. I know his music quite well, so I enjoyed very much listening to live renditions of  "Hannah", "Veronica Said", "Wobbles", "Today I Took Your Picture Down" as well as the album's title track. We also heard lots of newer tunes, but sadly, I don't know their titles.

The only semi-nod to Benmon't work with Tom Petty, was "Welcome To Hell", a song from Mudcrutch's second album. It sounded great.

A few words about Benmont's unannounced guests. While Mike Campbell's appearance was not only anticipated, but almost expected, we all got a thrill when he took the stage along with England's Hattie Webb, who is best known as one half of the Webb Sisters - you may remember them from Leonard Cohen's world tour that kicked off in 2008. Accompanied by Benmont and Mike, Hattie sang "The House Of The Rising Sun", followed by her own number, "River", culled from her 2017 solo album. For the latter, Hattie accompanied herself on harp. Very nice.


The evening's other guest was Regina Spektor, who was received by the crowd with great enthusiasm. She opened her mini-set with a gorgeous rendition of "Over The Rainbow", the well-known tune from "The Wizard Of Oz". Next, Regina sat down at the piano to perform "The Flowers", a self-penned tune whose coda had elements of Russian folkloric music, or so I thought.

Throughout most of the evening, Benmont and his guests benefited from the exceptionally good accompaniment provided by Sebastian Steinberg on upright bass.


Benmont ended his set with a free-for-all, as he called it. Together with Mike and Sebastian, he unleashed a rousing rendition of Bob Dylan's "Leopard-Skin Pill-Box Hat".

The entire concert was great, but to these ears, Benmont saved his best for last - his two-song encore, first the traditional "Corrina, Corrina", followed by "Why Don't You Quit Leavin' Me Alone", also from his solo album, were absolutely superb.

I went to the concert with two dear friends, Scott and Odette, who both had a great time, particularly Odette. 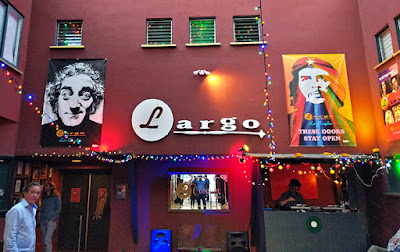