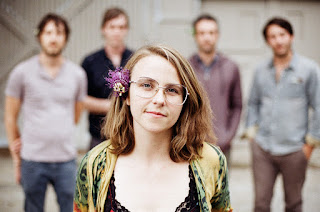 This was my first time to see the Deer in concert. While listening to the band, I tried in vain to come up with the genre that best described their music, so when I got home, I surfed to their web site and here's the wording I found there: "Described as transcendental Texas folk, Cosmic Americana, and stargaze surf-western, the Deer weave psychotropic soundscapes and tranquil, vivid dream-pop". I could not have said it better myself.

The band came out as a quartet consisting of Grace Rowland Park (lead vocals, guitar, keyboards), Michael McLeod (guitar), Alan Eckert (drums, vocals) and Jesse Dalton (upright bass, vocals). They played mostly their own material, none of which I knew, and as it's always the case with new music, I liked some songs better than others. The inclusion of "Head Over Heals", the song made famous by Tears For Fears in the eighties, was a welcome digression from their own numbers. They also played "Walking In Space", a lesser-known song from Hair, the musical.

Fronting the band, Grace impressed me with her beautiful singing voice and pleasant personality. With their understated playing, the band gave her outstanding support. Some of the evening's best moments came during the band's instrumental interludes, which - with their sometime jazzy and sometime psychedelic tones - had little to do with any traditional genres one could frequently hear at McCabe's.

The evening kicked off with an opening set delivered by Josiah and The Bonnevilles, which turned out to be Josiah without any Bonnevilles. "The Bonnevilles are very small, you can't see them", quipped Josiah soon after he took the stage. Accompanying himself on electric guitar, he sang six or seven songs that did not instantly connect with me, except for his set-ending "Six Dollar Check". 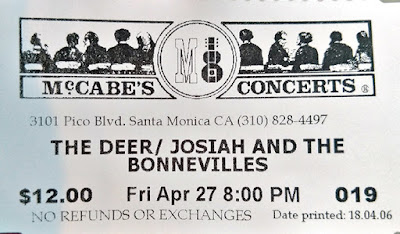 Email ThisBlogThis!Share to TwitterShare to FacebookShare to Pinterest
Labels: Josiah & The Bonnevilles, The Deer