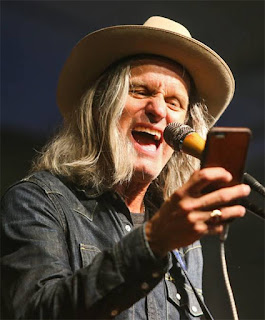 Sunday night I witnessed an amazing show put on by the immensely likable and zany Steve Poltz, the Canadian-born singer-songwriter I had been unwittingly neglecting for years.

My introduction to Steve's music took place in 2005, also at McCabe's, where Steve shared the stage with three other musicians, namely Adam Carroll, Beaver Nelson and Jud Newcomb. The round-robin format of that evening offered a good variety of styles, but was not the right framework for any of the musicians to really show what they could do.

I went to Sunday night's show not really knowing what to expect, but Steve made a fan out of me with his very first song, the hilarious "Born In A Band", featuring immortal lines such as "I'm not Christian, I'm not Jewish, my religion is Jerry Lee Lewis" and "When the doctor put the stethoscope to the womb, my very first words were Wop Bam A Loo Bam Boom". What followed was an avalanche of funny stories, intertwined with songs that, even at first blush, sounded great. The ratio of spoken word to music may have been a little high, but that did not bother me at all, as - without exception - Steve's stories were thoroughly entertaining. Moreover, with a show that clocked in at a little over two hours, music was definitely not in short supply.

Quite a few songs stood out to these ears, among them "Windows Of Halifax" and "Folksinger". Another highlight was the appearance of Lisa Sanders, a San Diego-based singer, with whom Steve sang "Rainbow" and "You Were Meant For Me", the big hit written by Steve for Jewell a few years back.

In addition to his own songs, Steve also played a couple of covers. John Hartford's "Presbyterian Guitar", the evening's only instrumental number, was an absolute delight, while the Grateful Dead's "Box Of Rain" may have been the evening's only low point. Indeed, I'm yet to embrace the music of the Dead, not even when it's performed by others.

I can't post a set list, as there wasn't any, but I do remember a few other songs that I really liked: "Devices", "Silver Lining" and the set-closing "I Want All My Friends To Be Happy".

As good as the whole show was, Steve saved his best for last: standing on a front-row chair and assisted by Lisa Sanders, he whipped the crowd into a frenzy with his humorous rendition of Woody Guthrie's "This Land Is Your Land". It was one of the best moments I have ever witnessed at McCabe's, or anywhere else, for that matter.

Steve Poltz is a truly special performer - I can only think of two other musicians whose live act is somewhat close to what Steve does: Loudon Wainwright and Peter Himmelman.

Shaking hands and exchanging a few words with Steve after the show put an end to an incredible night that I definitely want repeated. 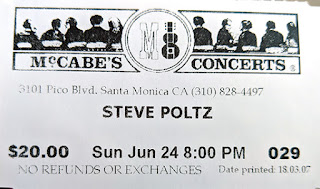