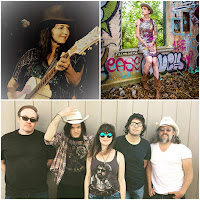 This was a triple-header of sorts, with three different acts delivering sets of decent lengths, all this for a whopping twenty dollars ... I wonder how these musicians can support themselves via making music.

KP Hawthorn and her band took the stage just a few minutes after 8 PM. Her set was the shortest of the three. I did not know any of the songs she sang for us and, except for the set-opening "405", neither of them was an instant hit with me, as is often the case when I hear new music. KP's band included Rick Shea on guitar and KP was gracious enough to allow him to sing one of his own songs, "I'm No Good Without You".


After an intermission, Nocona took the stage and played a set of music that was all new to me. While rooted in Americana, their sound had all sorts of other influences, including psychedelia, believe it or not. Just like KP Hawthorn's set, Nocona's music was not instantly accessible, at least not to these ears. The band included Chris Isom (vocals, guitar), Adrienne Isom (upright bass, vocals), Justin Smith (drums), Elan Glasser (mouth harmonica) and Dan Wistrom (pedal steel guitar). By the way, Chris and Adrienne are married to each other.


While I had some trouble embracing the music of the evening's first two acts, I had an instant connection with Gal Holiday's far more accessible songs. Accompanied by her band, the Honky Tonk Revue, Gal delivered a joyful set of mostly original material and also a cover or two. One of the covers, John Prine's "In Spite Of Ourselves" turned out to be the evening's only song that I knew. I loved Gal's voice and singing style and I was totally taken by her relaxed but confident stage demeanor. She received excellent support from her band, which included Matt Slusher (electric guitar), Justin LeCuyer (acoustic guitar), Rose Cangelosi (drums) and Corey McGillivary (upright bass). 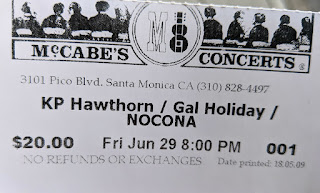