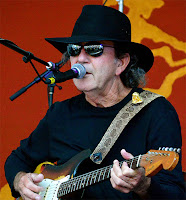 The Grammy Museum opened in 2008, yet inexplicably, Tuesday night was my first time to walk through its doors. I'm glad I did. I paid $26 for my ticket, while parking set me back a whopping 30 bucks. Welcome to the LA Live district of Downtown LA!

Sticking with the venue's typical event format, Tony Joe White and museum executive Scott Goldman chatted on the stage for about fifty minutes, then Tony Joe delivered a set of medium length, I'd say forty minutes or so. This was a thrilling event for me, as I count myself among Tony Joe's earliest fans. Indeed, my love for his music goes back to the late sixties, when I first heard "Groupy Girl".

I listened with great interest to every word uttered by Tony Joe with his delightfully heavy Southern accent. He spoke about his earliest musical influences, Lightnin' Hopkins in particular, as well as his earliest days as an aspiring musician in Corpus Christi, Texas. He also spoke about his subsequent interaction with Elvis Presley and Tina Turner, among others.

The musical part of the evening kicked off with "Stockholm Blues", played by Tony Joe solo, after which he was joined by Bryan Owings, a drummer with impressive credentials. To these ears, the highlight of the show was Tony Joe's guitar playing and the distinctive sound of his wah-wah pedal.

This was a very special evening for me, as I have been idolizing Tony Joe White since my teenage years. I hope and pray that I'll get to see him again.