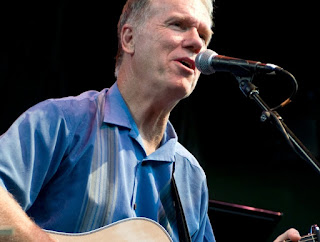 In his seventy-second year of existence, Loudon Wainwright has remained the same incredible performer who picks you up the moment he takes the stage and never lets you go. With his trademark mix of humorous and thought-provoking songs and chatter, he touches me like few other artists. His Saturday night appearance at McCabe's was my twentieth time to see Loudon live and - spoiler alert - I went home absolutely elated by the quality of his performance.

With his voice and wit virtually intact, Loudon kicked off the proceeding with "A Little Piece Of Me" and "Grey In LA". What followed was a good mix of newer songs as well as old favorites, such as "The Swimming Song", "Cardboard Boxes", and the hilarious "Grammy Song", which he delivered interspersed with equally funny readings from "Liner Notes", his first and so far only book. Other songs that I really enjoyed hearing again: "White Winos" and "Be Careful There's A Baby In The House".

Two songs stood out from among those few numbers that were new to me: "Love Gifts" and "Presidents' Day", the latter generating quite a bit of laughter in the room. Late in the show, Loudon surprised me with the singing of Richard Thompson's "Down Where The Drunkards Roll", which sounded great. By the way, Loudon and Richard are good friends.

Loudon also played two numbers on the piano, "Kick In The Head", a song he wrote in the seventies and the much more recent "Song In C".

Needless to say, Loudon also sang and spoke about his father, grandfather and a few other Wainwrights, so there wasn't anything revolutionary in his show but that suited everyone just fine. I loved everything Loudon did and, as I said, I went home extremely happy. 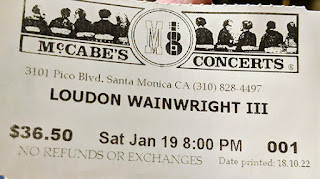