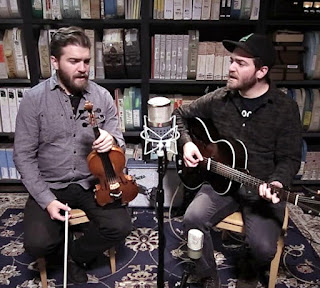 To no one's surprise, my first concert of the new year took place at McCabe's Guitar Shop and it was a good one.

It didn't take long for Adam and David Moss, collectively known as the Brother Brothers, to conjure up favorable comparisons with the likes of the Everly Brothers and Simon & Garfunkel. Indeed, their vocal harmonies are some of the finest I have ever heard and I'm not exaggerating. Moreover, they write good songs, play multiple instruments, have likeable personalities, so they do have most of what it takes to put on a good show.

Playing without a predetermined set list, Adam and David delivered many songs from "Some People I Know", their recently released debut album. The ones I liked the best were "Red And Gold", "Banjo Song" and Peter Rowan's "Paper Bride". Not on the album, but sounding equally good, were "Bird In A Tree" and "Notary Public".

The duo's two-song encore consisted of David Houston's "I Told Them All About You" and Dolly Parton's "I Will Always Love You". Both sounded great.

Overall, Adam and David impressed me quite a bit. I have nothing negative to say about their performance, but as I was driving home, I thought that the inclusion of an uptempo medley of a few Everly Brothers hits would have brought the house down.


Connor & Arianne Vance, the evening's opening act, played a short set that, in one word, can be described as pleasant. Their best number was "We Are Not The Jet Set", originally recorded by John Prine & Iris DeMent a couple of decades ago. Connor is well-known to me as the Dustbowl Revival's devilishly good fiddler. 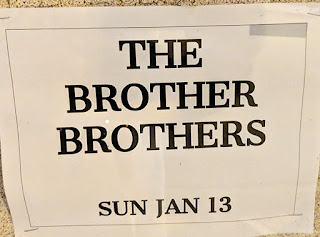