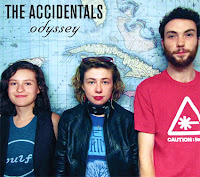 This was my first time to see the Accidentals in concert and one thing is for sure: it won't be my last.


Friday night at McCabe's, Savannah Buist, Katie Larson and Michael Dause, collectively known as The Accidentals, put on a show that, in most respects, far exceeded my most optimistic expectations. These guys know how to put their musical talents to good use, as they blend disparate genres, like rock, folk, jazz, pop and classical, into an infectious mix that sounded profoundly modern to these ears. I was also very impressed with the speed with which Savannah and Katie switched from one stringed instrument to another. Their use of the electric cello and electric violin, each sporting slimmed-down bodies, was particularly captivating.

Some of the younger acts I have seen in recent years put on performances that I found to be excessively lethargic, but that was definitely not the case Friday night. The trio's show was exceptionally well-paced, with just the right amount of spoken word and plenty of dynamic moments - one could just feel the energy building up toward the glorious crescendo that ended their set. Occasionally striking rock & roll stances, Sav and Katie were exceptionally good and so was Michael, whose powerful drumming was an equal contributor to the success of the evening.

I suppose that most of the songs played by the Accidentals were self-penned and there wasn't a single dud among them. I recognized only one cover, Dave Brubeck's "Take Five", then - for the evening's encore - the trio lined-up at the edge of the stage to deliver what I think was their only other cover song, "Shining In The Distance", from the repertoire of Lindsay Lou & The Flatbellys.

So, do I have anything negative to say about the concert? Yes, I do. The show just wasn't long enough. Indeed, clocking in at only seventy-five minutes, theirs was one of the shortest headlining sets I have ever caught at McCabe's. Still, no complaints, as the trio held nothing back. No doubt, if the band ever comes back to McCabe's, I will be there. 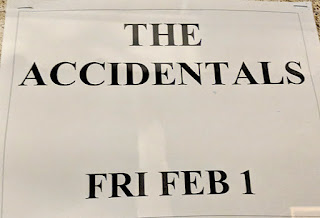 Email ThisBlogThis!Share to TwitterShare to FacebookShare to Pinterest
Labels: Accidentals (The)