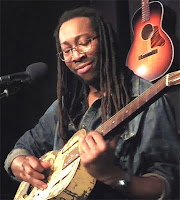 Saturday night at McCabe's I witnessed the performances of not one, but two musicians who, in my opinion, fit the "niche artist" label to perfection. Indeed, both Hubby Jenkins, the headliner, and John Reed Torres, the evening's opening act, specialize in genres that are seldom heard, certainly not by the followers of mainstream music.

With catchy gospel songs like "Jesus Walked This Lonesome Valley", "The Last Month Of The Year", "Down On Me" and "I Heard The Angels Sing", Hubby Jenkins grabbed my attention from the very beginning. Alternating between his acoustic guitar and banjo, he kept me thoroughly entertained not only with his music, but also with his storytelling. Hubby turned out to be a treasure trove of knowledge about old-time music, as well as the social and racial injustice of those troubled times - listening to Hubby's stories about slavery and black banjo players made me feel a bit like a student in a classroom. But there were also moments of levity, with Hubby reading out loud random parts from a few Choose Your Own Adventure books, with the full participation of the audience. I could have done with a little less of that and a little more music.

I was very impressed with Hubby's guitar and banjo picking and I liked his singing, too. His rendition of the music of Blind Willie Johnson, Bukka White, Uncle Dave Macon and others sounded great to these ears. One of the highlights of the show was the thought-provoking "Little Log Cabin In The Lane", a song written more than one hundred years ago by a white man named Will S. Hays, about a slave missing the comfort of slavery, as Hubby put it. "John Henry" and "Coo Coo Bird" were two other stand-out tracks.

In the absence of a predetermined set list, the entire evening had a free-flowing feel to it, very much like spending time in the living room of a musician friend. I'm pretty sure this was not my last encounter with Hubby.

The evening kicked off with a thirty-minute set by John Reed Torres, a credible ragtime pianist who has played at various ragtime festivals in Europe, South America and the States. His first number, Scott Joplin's "Maple Leaf Rag", was followed by five self-penned tunes and one other Scott Joplin composition titled "Gladiolas". In between songs, John spoke with eloquence about the history of ragtime music, a genre that most people know precious little about. While I liked his performance, I think that John's show could have benefited from the inclusion of a well-known rock or pop song re-imagined as a ragtime number. 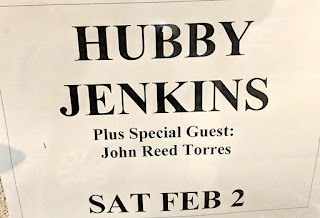