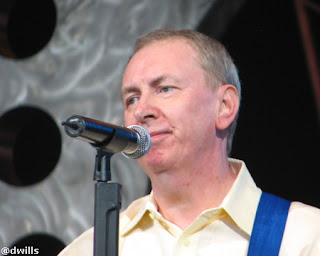 Many years after his mind-blowing concert at McCabe's in 1991, Al Stewart returned to the same venue in the summer of 2002, and - needless to say - I was the first in line. My expectation were high, I was hoping for Peter White to show up once again and deliver yet another great performance, but it wasn't to be: Al played the whole set solo. Yes, the vocals were good, the delivery was great, but there was something missing - Al's strumming just wasn't a good-enough substitute for Peter's finger-picking virtuosity. I went home a bit disappointed.

My next encounter with Al Stewart took place on November 19, 2004, also at McCabe's, where else? This time, Al was accompanied by newcomer Dave Nachmanoff, who did a very good job as Al's sidekick, but once again, I had my mind set on Peter White, so anything else just wasn't good enough for me. They played a typical Al Stewart set, with a bunch of newer songs, the mandatory oldies, the funny chatter and frequent lessons of history, it wasn't bad at all.


Then came my fourth Al Stewart concert, on April 24, 2009. I went with Barry and Barbara, two British friends. This time Al had Laurence Juber as his accompanying guitarist. I had not seen Laurence before, but I was very familiar with his great career. The show had an opening act - Laurence Juber himself. He played seven songs, among them "Little Wing", "While My Guitar Gently Weeps" and "Every Breath You Take" and he was phenomenally good. After a short break, Al and Laurence took the stage together and what followed was definitely of "Peter White quality". Their interaction was clever, relaxed and funny, which is what you would expect from two old friends and long-time musical partners. They played "On The Border", "Year Of The Cat", "Night Train To Munich" and many other goodies. Al shared a few fun stories involving Lionel Bart and Tommy Steele, plus the usual historic references, as you would expect from the erudite British gentleman that he is. Great show! 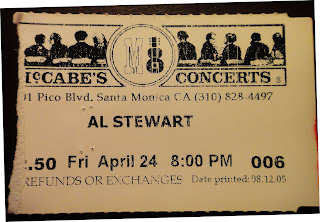 Watch this live recording of "Night Train To Munich", featuring Al Stewart and Laurence Juber together:
Posted by Gabe at 9:29 PM