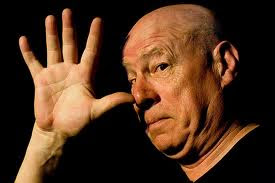 This was my third time to see Neil Innes live and once again I had a ball. It's true, the three shows I've seen were quite similar, but I just can't get enough of something that's good and classy and that's exactly how Neil's shows are: good and classy. His shows may be similar, but by no means identical. This time there was no "Urban Spaceman" and no "How Sweet To Be An Idiot", but there was plenty of other entertaining stuff, from his old mid-sixties numbers "My Brother Makes The Noises For The Talkies" and the semi-raunchy "I'm Going To Bring A Watermelon To My Girl Tonight", to newer topical songs such as "Mr. Eurovision" and "Where Has All The Money Gone", plus Rutle medleys, Monty Python songs, piano playing, bogus commercials, French impersonations, ukulele strumming, one-liners, you get the idea.

There was lots of audience participation and Neil could not have found a more willing audience, myself included. Singing the "Philosophers Song" together with Neil was a thrill and kudos to myself for having practiced the words with diligence so that I could keep up with the Master.

There was end-to-end laughter, but none louder than the Ego Warrior bit, nor the last part of his set, when Neil had the entire audience spell out S-O-D  O-F-F, which - you guessed it - led to Neil's retreat from the stage, head bowed down, before coming back for a short encore.