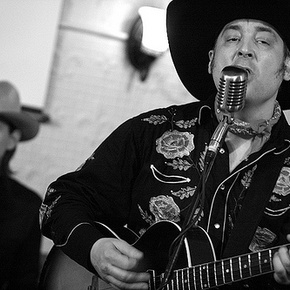 I first saw Smokey Hormel in April 2001 at UCLA's Royce Hall, where he was playing a supporting role in Hal Willner's Harry Smith Project, a large scale event that brought together many big names. It was his outstanding guitar playing that made me take note of his name, so five years later, when McCabe's announced Smokey's headlining gig, I knew exactly who he was.

The two shows I saw at McCabe's were quite similar, as in similarly short. Inexplicably, neither of Smokey's two sets went beyond the 75 minute mark, and as such, they remain to this day some of the shortest shows I've ever seen there. And it's not that he had to do it all by himself - on both occasions, Smokey brought along a few outstanding musicians, some of them with well-established national reputation:


November 17, 2007
Greg Leisz
Richard Greene
Larry Taylor
Joey Waronker
Laura Kass
February 21, 2009
John Doe
Charlie Burnham
David Ralicke
Joey Waronker
My expectations of blistering guitar solos did not materialize. Instead, Smokey featured extensively his own vocals, which were OK, but not stellar. The band members were top-notch, they all had their solo moments.


In spite of the overall negative tone of this write-up, the two shows were not bad - there was plenty of good music and good musicianship, so we went home not unhappy, but definitely wanting more.