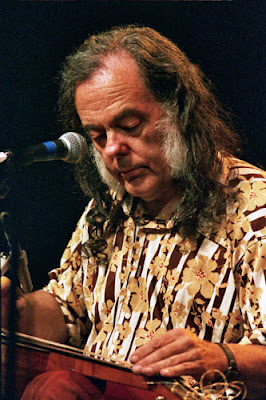 It was either late 1993 or early 1994 when I first saw David Lindley solo. The concert took place in David's home town of Claremont, California, in a beautiful church-like auditorium simply known as the "Little Bridges", not to be confounded with the nearby "Bridges Auditorium", a much larger venue. As expected, he played a variety of string instruments with great virtuosity, but elected to performed lots of song that I wasn't familiar with, so as far as I was concerned, his concert never took off. He was accompanied by Jordanian percussionist Hani Nasser, with whom David has toured and recorded extensively.


Fifteen years later, I caught him again, this time at McCabe's in Santa Monica. Once again I witnessed a good performance delivered by a master of his many instruments, but somehow the whole package did not bring me to my feet.

I don't think I will be motivated enough to go to yet another David Lindley solo concert, but I will definitely welcome him as a guest at someone else's gig.