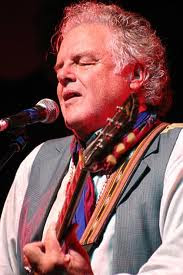 Peter Rowan has been a favorite of mine for over twenty years now, and like the good fan that I am, I haven't missed any of his not-frequent-enough concerts at McCabe's.
As if he didn't know anyone in LA, Peter came out all by himself and, accompanied by an acoustic guitar, delivered his first set with strong vocals and playing. He sang "Tumbleweed", "Panama Red", "Lonesome L.A. Cowboy", "Wild Mustang" and a new number titled "Two of a Kind".

After a short break, Peter came back for his second set, but this time he brought some company along: Gillian Welch and Dave Rawlings, both huge favorites of mine! The crowd screamed with excitement and so did I.
Their beautiful vocal harmonies and great guitar playing were something to behold. Together they sang "The Winds of Time", "Free Mexican Air Force", "Rainmaker" and a few more. Gillian sang lead on just one song, Bob Dylan's "I Dreamed I Saw St. Augustine".

The three of them remained on the stage not only for the entire duration of the second set but also for their two-song encore. Talk about getting your money's worth!

Overall, it was an exciting evening like few others. How can one not love McCabe's? 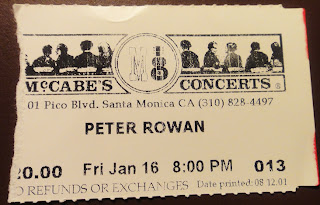