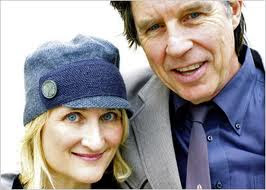 This was the second of two sold-out shows at McCabe's featuring the unlikely pairing of two artists from different generations and different musical backgrounds. Yet Jill Sobule and John Doe got along just fine, as if they had been playing together for a lifetime. It almost felt like watching two old friends jamming in a living room, that's how relaxed and comfortable with each other they appeared to be. It's always the case: when the performers are having fun, so is the audience, and we all had a lot of fun, with great songs and good humor that just kept coming and coming.

Frequently alternating between various stringed instruments, both acoustic and electric, Jill and John played songs from "A Day At The Pass", their current joint album, as well as some of their older material. Jill was in perfect vocal shape and I was delighted to once again hear "Where Is Bobbie Gentry", "Good Life", "Mexican Wrestler" and "San Francisco", among her other songs. Watching her intense delivery from my front-row seat was pure joy - if you have not seen Jill live, you don't know what you're missing. John Doe was equally good. I enjoyed all of his new material, but what I liked the best was his punk-ish delivery of "White Girl", from his days with X.

I typically don't like the use of profanities on stage, certainly not by female performers, but Jill's use of the F-word in her "We Want Our America Back" was nothing short of hilarious.

Throughout the evening, Jill and John were accompanied by bassist Dave Carpenter. Toward the end of the show, local songstress Cindy Wasserman popped in for a song.


The show was opened by singers Sean Wheleer & Zander Schloss, with the latter doubling up as an able multi-instrumentalist. Although somewhat dissimilar in terms of their musical backgrounds, Sean and Zander combined well to play a listenable set of self-penned songs. Zander's use of the bouzouki added more color to their set.

All-in-all, it was yet another great evening of music at McCabe's. 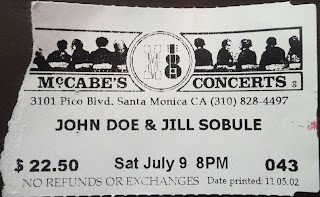