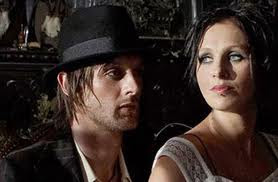 I can't say that I'm a fan of Kasey's voice, but I do listen to her music sometimes and whenever hubby Shane Nicholson gets involved, things get a little more interesting, as was the case with "Rattlin' Bones", their joint album released in 2008. The ensuing US tour in support of the new album brought them to McCabe's in September 2008.

The concert was announced as "Kasey Chambers & Shane Nicholson", but having had more solo albums under her belt, Kasey appeared to be playing the role of the "main attraction". She did most of the singing and talking, while Shane kept a somewhat lower profile. The best song of the evening was "Once In A While", a truly gorgeous tune that's been delighting me ever since.

The concert opened my appetite for Shane's music. In my opinion, his "Familiar Ghosts" solo album is at least as good as Kasey's best material, if not better.

Bill Chambers, Kasey's father, popped in unexpectedly for a few songs and his singing and guitar playing complemented the two "youngsters" very well. Later I learned that he is a well-regarded guitarist in Australia's alt-country scene.


Overall, the concert was good, but not earth-shattering. Still, I would probably catch them again sometime in the future.

Here's a live rendition of "Once In A While", performed just the way I witnessed it at McCabe's: