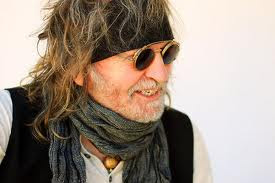 My brother occasionally shows up in California and every time he does, my first thought is to take him to a great concert, the kind he doesn't have access to where he lives. Trouble is he usually comes for only a day or two, which leaves me with few options when it comes to finding the ideal concert. In January 2007, my only option was Ray Wylie Hubbard at McCabe's, and as it turned out, it was a good option.

We went to the show rather unprepared - I knew only a small handful of Ray's song, my brother knew none - but Ray is the kind of performer who will grab you from the very first song and keep you hooked until the lights go back on. Mixing great songs with fun stories and accompanying himself on an acoustic guitar, Ray made us laugh and kept our toes tapping non-stop.

"Snake Farm" and "Polecat" are the songs that I still remember almost five years after the concert.

For his encore, Ray brought out Chris Robinson of the Black Crowes fame. He sat in for just one song. As we were sitting in the front row, I could have almost touched Chris, it was a thrill.

In August 2008 I went back to McCabe's to hear Ray for a second time, hoping to once again luck out with a famous unannounced guest. As it turned out, it was yet another case of unfulfilled expectations - not only there was no Chris Robinson, but Ray played the whole show without anyone guesting. Overall, this second helping had less of an impact on me.

Both shows were opened by I See Hawks In LA, a local alt-country band that left me rather unimpressed on both occasions.