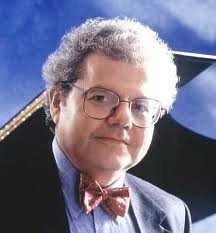 I practically never attend concerts of classical music, most certainly the result of the actions of my overly eager parents, who decades ago used to regularly drag my reluctant self to the concert hall while my buddies were having fun chasing soccer balls. Then I suffered more psychological trauma at the opera house, where, as a defenseless preteen child, I had to endure endless operatic spectacles that were akin to child abuse.

Fast forward a few decades ... three weeks ago I was offered a free ticket to hear Emanuel Ax at the gorgeous Disney Concert Hall in Downtown Los Angeles. So I went. Actually I was quite curious to see how I would respond to a performance of classical music after so many years of having stayed away.


Here's the main page from the concert programme: 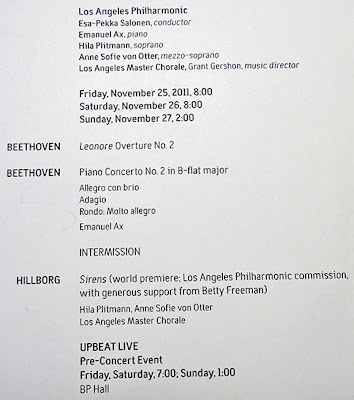 I enjoyed Beethoven's "Leonore Overture", which I knew decently well, but the whole thing was over in thirteen minutes. Then Emanuel Ax came out to play Beethoven's Piano Concerto #2, accompanied by a stripped-down orchestra. I was hoping that I would recognize at least a few parts of it, but somewhat surprisingly, that wasn't the case. Sure, Emanuel Ax can play, but at no time did the music grab me. Likewise, the encore delivered by Emanuel Ax solo did not sound particularly great to these ears and, by the way, there was no announcement as to the piece selected by the artist for his encore.

The intermission was fun, as I had time to explore the venue, from top to bottom.

The second part of the program featured a horrific piece of music titled "Sirens", composed by Anders Hillborg and involving the full-blown symphony orchestra, Grammy-winning soprano Hila Plitmann, mezzo-soprano Anne Sofie von Otter and the Los Angeles Master Chorale. Maybe I just need more training in order to get along with this genre called "contemporary classical music", but one thing is for sure: there were enough dissonant sounds in this piece of work to last for a lifetime. The question is "Was it only me"? I don't think so. The three ladies whom I accompanied to the concert had unfavorable comments that were strikingly similar to mine.

So was it worth the effort of going to an event I normally don't feel at all compelled to attend? The answer is yes, although the whole experience wasn't nearly as powerful as I had hoped it would be. I would certainly return to the Disney Concert Hall, preferably with another free ticket in my pocket, but in my case, spending over a hundred dollars for a single ticket just doesn't make much sense. 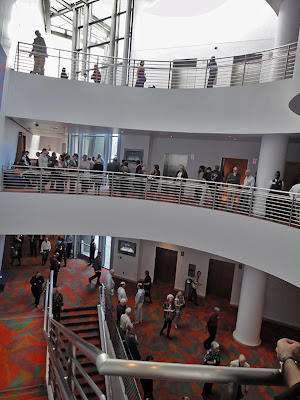