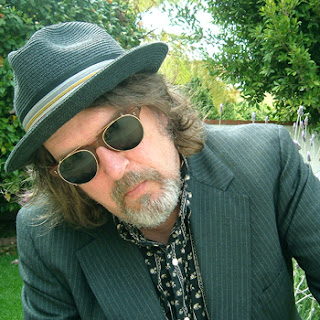 Great show last Saturday at McCabe's. Almost three years after his unexpected open heart surgery in January 2009, Peter Case appeared to be in great shape in all respects - showing no signs of slowing down, he played two sets of decent length, gave an encore and spent time with his fans not only before and after the show, but also during the intermission.

Peter's stage decoration was the most elaborate I've ever seen at McCabe's, and I've seen close to three hundred concerts there. In addition to the routine stuff - guitars, piano, amps, wiring and the like - there were flowers, candles, a coat hanger, hats, a miniature Christmas tree, books, more flowers, a hand painting and a vintage American flag with forty-eight stars.

The show was recorded for a long-overdue "Peter Case Live At McCabe's" album, yet I did not get the impression that there was a predetermined set list. Peter talked a lot between songs and I don't mean it as a negative - everything he said was captivating, informative and quite often funny. In terms of the song selection, the main focus was on his own songs, both old and new, but there were plenty of covers, mostly classic blues numbers from the masters of the genre (Sleepy John Estes, Sony Boy Williamson, Jimmy Smith, Leadbelly and others).

Peter switched frequently between his electric and acoustic guitars and played a few numbers at the piano as well. There was an "anything and everything goes" feeling on the stage, which is exactly the opposite of what one would think a recording session is like.


For me, the highlights of the show were "Beyond The Blues", "Words In Red" and "Ain't Gonna Worry No More". "Put Down The Gun" was good as well.

There was a three-song encore that included "Which Side Are You On", the old labor anthem, and his own "Hidden Love". He performed the entire encore from the floor, standing right in front of the stage. For the labor song he was joined by folkies Cindy Lee Berryhill and Phranc, but their contributions were minimal.

All in all, this was the best Peter Case concert I have ever seen. 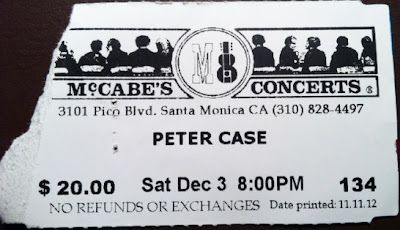