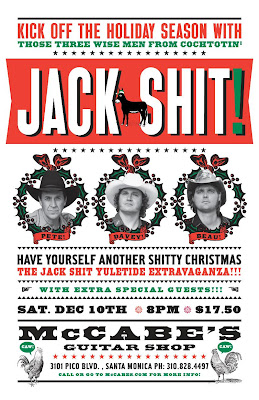 It was holiday bliss last night at McCabe's and it was much more than just the colorful Christmas lights decorating the stage: Jackshit, the band, went out of their way to put on a show that was truly memorable and I don't believe anyone enjoyed it more than I did. This was my twenty-fourth time to see Jackshit live, and if you think that is excessive, then you haven't seen Jackshit live.

But first, let's quickly recap who Jackshit are:


The show started just like your typical Jackshit show, with "Hi, How Are You" and "Christine's Tune", followed by a mix of songs that is continually being renewed. Gone are old faves such as "Gone, Gone, Gone", "I Believe" and "Tears A Go Go", but in are Jimmie Vaughan's "Boom Boppa Boom" and "False Hearted Lover", which sounds better every time I hear it.

The concert poster promised "Extra Special Guests", and extra special they were. Introduced as "Jenny Shit", out came Jenny Lewis, formerly of Rilo Kiley and current half of the up-and-coming duo Jenny & Johnny. She opened her four-song set with "Jackson", with Val sharing vocal duties. For the remainder of her set, Jenny was joined by "Johnny Shit" and they sounded great together. I should have instantly recognized who he was, but it wasn't until after the concert that I found out that Johnny was Jonathan Rice, the other half of the aforementioned duo, as well as Jenny's boyfriend.


After three more songs played by Val, Pete and Dave, it was time for yet another surprise guest and when Val invited "Brown Shit" to take the stage, pretty much everyone knew who would be coming down the stairs and indeed, just like last year, Jackson Browne joined the band for a short set, four songs in all. Seeing two Rock & Roll hall-of-famers on the stage at the same time (Jackson & Pete) was very special.


The highlight of Jackson Browne's appearance was undoubtedly "Take It Easy", the mega-hit of the Eagles, a song co-written by Glenn Frey with Jackson himself. For this number, Jenny Lewis came out once again to sing backup vocals. I also liked "Redneck Friend", an uptempo song that has generated lots of speculations over the years as to who or what the "redneck friend" might be. Jackson's voice was strong and I enjoyed watching his interaction with Val. His overall presence on the stage made a very favorable impression on me.

Youngster Charlie "Ringo" Shit made a cameo appearance replacing Pete Thomas at the drums for the playing of "Why Don't We Do It In The Road".

The always-fun Shit Horns showed up as well, which is another way of saying that we got to hear "Ring Of Fire" and Herb Alpert's "The Lonely Bull", two songs that should never be left out from any Jackshit concert.


"The Lonely Bull" turned out to be the final song of the set. The Boys From Cochtotin came back for a one-song encore, which somewhat predictably, was Johnny Horton's "I'm Coming Home", delivered as usual in epic fashion.

Noticeably absent from the set list was "Bull Rider", the perennial Jackshit favorite, a song written by Rodney Crowell for ex-Father-in-Law Johnny Cash. Also missing was "Pretty Polly", in spite of her presence on the set list.

Hanging out at McCabe's after the music's over is always fun, especially when the artists come down and mingle with their fans. Here are some photos taken after the concert:


I went to the concert with a few friends, most of them with previous Jackshit experience. Here are some of them:

Jackshit remains a huge favorite of mine. In a metropolis where I have hundreds of concerts to choose from on any given night, literally, I find myself coming back, time and time again, to see Val, Davey and Pete and I enjoy each and every one of their concerts as if they were my first. Then there's the pleasure I get whenever I bring new folks into the fold, which was the case last night with John R, Gary K and his wife Andrea. They now know Jackshit.