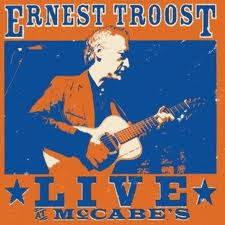 While most of the world's population is going gaga over Lady-You-Know-Who, I prefer to focus my attention on deserving musicians whose names don't ring nearly as many bells. Or no bells at all, as was recently the case with singer-songwriter Ernest Troost.

I'm always eager to discover new music, so whenever McCabe's announces names that I'm not familiar with, I immediately turn to the Internet as part of my due diligence effort. At first, I wasn't particularly impressed with Ernest Troost's music, so my initial plan was to stay home. But an email from my friend Steve made me gave Ernest a second listen and that's when his "Travelin' Shoes" song hit me pretty hard. Without delay, I logged into McCabe's' web site and bought myself a ticket.

Usually I mention the opening act only after I'm done writing about the headliner, but show opener Shaun Cromwell was just too good to be relegated to the end of this write-up. His thirty-minute set was actually too short - I could have gone on and on listening to his songs and voice. Good guitar and banjo picker, too. I know how hard it is to stand out in the overcrowded field of singer-songwriters, but Shaun has a future, as I found him to be more exciting than many other nationally-known musicians of the same genre.

Then out came Ernest Troost, whose resume lists an Emmy award received in 1996 for the music he wrote for "The Canterville Ghost". Ernest played a fairly long set that left me shaking my head in disbelief: there wasn't a single weak song the whole evening - now how often does one get to say that?

One after the other, Ernest's songs kept me fully engaged and my brain never had a chance to wander away from the stage. The whole show was exceptionally well paced and I'm yet to mention Ernest's great supporting cast. Looking and sounding great, Nicole Gordon provided outstanding back-up vocals and sang two solos as well. Mark Goldberg played the upright bass and the often-seen Debra Dobkin took care of the drumming duties.

The funny thing is that sitting in the front row at McCabe's by no means guarantees the best viewing angles. From where I sat, Debra Dobkin was totally, entirely and completely hidden behind her drum set. Likewise, the most I could see of Mark Goldberg was the lower half of his right leg, everything else was covered by his humongous bass. But no complaints at all about the sound.

Shaun Cromwell came out to join Ernest's band for the playing of "By And By", then he popped in once again for "Harlan County Boy", the concert's encore.

Ernest played many of the songs appearing on his "Live At McCabe's" CD, recorded in January 2011. Sadly and ironically, the song that first caught my ear, "Travelin' Shoes", was left out of his set, but that was nothing but a minor blemish on an otherwise unforgettable evening of stellar songwriting and great musicianship.

It's tough to pick a highlight when all songs had quality written all over them, but I would list "O Love", "Resurrection Blues" and "By And By" as some of the best. And one thing is for sure: the next time Ernest Troost plays McCabe's, I will be there without anyone needing to nudge me. 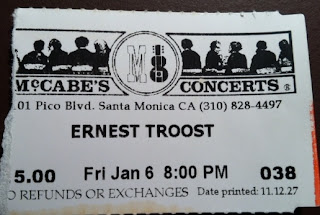