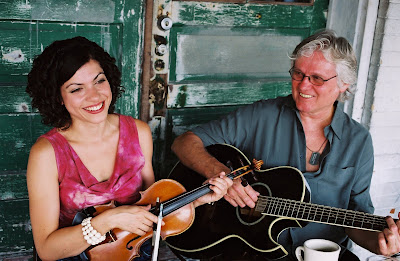 I don't think there's anyone on Planet Earth not to have heard "Wild Thing" and "Angel Of The Morning", but I bet very few know that these radically different pieces of music come from the pen of the very same songwriter. I didn't know it either at the time when McCabe's announced Chip and Carrie's joint concert in 2006, nor did I have a clue as to who Chip & Carrie were. With Google's help, I quickly became aware of Chip's impressive songwriting credentials and that was enough to make me buy my ticket for the show, while Carrie remained an unknown wild card.

My evening started with a close encounter with a true celebrity - the lights were still on when I bumped, in a physical sense, into Jon Voight, who was there to support his little brother Chip. Then the music started. The show was near-perfect - all at once, I discovered two exceptionally gifted musicians from two different generations who were nonetheless a great match. They played ballads, rockers, country pop, oldies, new songs, covers, original material, they told stories and had a famous on-stage guest in the person of the aforementioned Jon Voight.

Then there was John Platania, whom I had not known before. Introduced as Van Morrison's longtime guitarist, I paid extra attention to his playing and became an instant fan of the very distinctive sound of his electric guitar.

Midway through the show, Jon Voight took the stage to sing one of Chip's earliest compositions, "Faded Blue", an outstanding song.

The concert had many great moments,  but the highlight of the evening was definitely the "Wild Thing" sing-along, and yes, I knew the words from start to finish!

They also played Johnny Cash's "Big River" and Chip's own "Angel Of The Morning", which came complete with a hilarious story about Chip's meeting with Shaggy, the reggae artist who recorded a wildly successful version of the song.

Carrie's talents as a singer, songwriter and fiddler were extensively showcased. Her best song was "Never Gonna Be Your Bride".


Two years later, in June 2008, I went back to McCabe's to reconnect with Chip Taylor's wonderful music. This concert was announced as Chip Taylor solo, so no Carrie Rodriguez this time. Sadly, John Platania couldn't be there either - he was on the road with Van Morrison and his "Astral Week" tour - now that's an unassailable excuse, if there ever was one. Chip came out with a worthy replacement, guitarist Mark Goldenberg, and together they put on a show that I enjoyed very much. Jon Voight popped in again to sing the same song, "Faded Blue", he performed in 2006.

To this day I remain a huge Chip Taylor fan. He has won me over for life not only with his superb songs and great delivery, but also with his humble demeanor and the obvious respect and appreciation he shows to his fans. Chip is a true class-act.