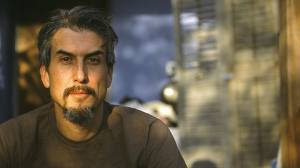 While watching Howe Gelb's performance last night at McCabe's, I kept asking myself "How in the world can I describe this show in words". Almost twenty-four hours later, I still don't have a good answer - trying to write about a quirky artist and his idiosyncratic ways is a daunting task, no doubt.

In Howe Gelb's case, "quirky" means nonconformism, and I mean nonconformism of the highest degree. He doesn't care about industry trends. He is not interested in what sells at the moment. He is not into copying anyone else. He does what he does and that's just the way it is. The end result may not please everyone, but isn't that the case with every other artist that has ever lived, Elvis and the Stones included? Of course, the trick is to produce more fans than detractors, and if you achieve that, you will be playing to full rooms for the rest of your life. But there was no full room last night at McCabe's and there were no encores either. Nor has anyone left early and that, I think, captures the difficulty of writing about Howe Gelb's performance.

Howe delivered his music in a vocal style that I haven't heard before. He played the guitar like no one else, not better, not worse, just different. When playing the piano, he once again showed his uniqueness by mixing different styles and techniques, occasionally throwing in a few dissonant notes. Even the way he spoke, sometimes slow, sometimes just whispering, was so different from your typical stage banter. Words like unique, different, original, peculiar, singular and uncommon are totally appropriate to describe Howe's stage presence and artistry in general.

The upshot of it all was something that, in my opinion, does not have to be experienced again, yet I do feel good about having been exposed to Howe Gelb's universe. And I'm extremely curious to see the results of his current production work with KT Tunstall, who was there last night and even joined Howe on stage for a few songs.

I was hoping to hear some of KT's own music, but that didn't happen. She soloed on one song, "Hollow Ground", then sang backup with Howe on three more. Husband Luke Bullen provided percussion support on a song or two. KT's singing was top-notch, it was a thrill seeing her up-close and yes, I would have loved to hear her voice just a little longer. And what brought Howe and KT together remains a mystery, as there is practically no overlap between their respective genres, not to mention the accessibility of their musical outputs.

There were only two songs I recognized, "Cowboy Boots On Cobblestone" and "One Diner Town", both coming from Howe's recent "Alegrias" album. 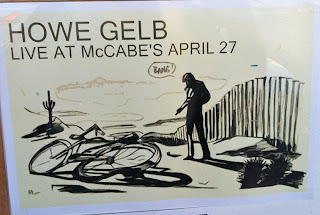